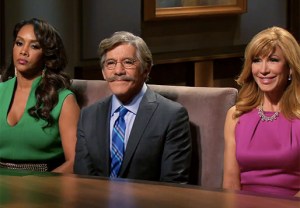 TVLine has an exclusive clip from the shocking new episode, in which Donald Trump announces that, even after last Monday’s massacre — in which Brandi Glanville, Kenya Moore, Ian Ziering and Johnny Damon all got the ax — he’s still got one more pink slip to hand out.

In addition to laying down the hammer, Monday’s episode also sees the return of six fired celebs, all of whom will aid this season’s final two in their last challenge.

But first: Which of the final three should be dropped — Geraldo Rivera, Vivica A. Fox or Leeza Gibbons? Hit PLAY on the preview clip below, then drop a comment with your pick.