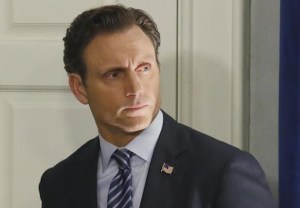 This Thursday on ABC’s Scandal, Fitz, Jake, Cyrus, Mellie, Huck, Quinn, David and one surprising ally conspired to derail VP Andrew’s coup and follow Olivia’s trail of breadcrumbs. But when all was said and done, were they too late to the rescue?

LOVE… AND WAR | Coming off Andrew’s “How ya liking that war now?” taunt, Fitz realizes that his hands are largely tied when it comes to signaling for help, seeing as the veep has (somehow, and amazingly) switched out POTUS’ Secret Service detail with a bunch of treasonous agents as well as embedded snoops with the White House support/butler staff — meaning, “every phone call, every toilet flush” will not go unnoticed.

Yet later, out on the balcony, Fitz whispers into Mellie’s ear that her “boyfriend” has orchestrated a “bona fide American coup,” and as such his choices are to let Olivia die or send troops to die. FLOTUS’ take on things is, well, honest: “I thought you loved her…? Don’t tell me we’ve been through all this for a cheap screw. You know what you have to do.” So Fitz goes on TV and announces the onset of military action vs. West Angola.

FLORENCE TO THE RESCUE! | Back in her “prison,” Olivia is forced to read a script to a video camera, as proof of life and what not. But in doing so, she stops to ask for some water, using the glass to — as I predicted on Twitter, so gonna be a spy in my next life — catch a reflection of her captor. After disgraced Secret Service agent Tom facilitates a secret meeting between Fitz and Jake, POTUS hands off his copy of the video, and Huck soon enough spies the reflection, though the man (Ian) isn’t popping on any databases.

But then the Gladiators catch a break when Marla Gibbs comes knocking at OPA, looking for “the black lady.” After once putting her off, Quinn discovers that this woman is seeking her missing pal Lois, who lives across the hall from Olivia. Checking out the place, Huck finds Liv’s ring — proof that she was there — and then they use the Internet router to ID Otto, which leads them to Ian Woods aka Claude Jolie aka Martin St. John. Huck pings the guy’s cell, which doesn’t help much — but luckily Huck has another asset to pursue.

GONE (AGAIN) GIRL | Huck twice pops up in Elizabeth North’s home, threatening her daughter if she doesn’t help them find Olivia. After Huck tortures/burns/scars Elizabeth, she goes to Mellie with the truth and how she had no role in the kidnapping. Mellie in turn pays Andrew a visit, discloses that she knows his Olivia ploy, and questions her own role in his future as the next POTUS. Andrew, sadly but conveniently (but understandably!), buys into her come-on and they begin canoodling. And by the time they’re done and Andrew is zonked, Mellie has pinched his cell phones, which allow Huck & Co. to narrow down Ian’s pings to a Harrisburg airplane hangar.

Thanks to David Rosen and his 10-gallon white hat, the DEA launches a “drug raid” on the hangar, with Jake along for the ride — but Olivia has vanished from the faux prison. Why?

Because earlier, she mind-effed Ian’s socks off, suggesting that he sell her on the open market for a very pretty penny and be a boss, rather than “honor his contract” with the VP and be her babysitter for the next three years, when Fitz’s second term is up. (“Own Olivia Pope, you own the president!” goes her pitch.) So at episode’s end, we see Fitz receive a call from showered-and-ironed Olivia, who only gets in a quick “hi” before Ian grabs the sat phone and gives POTUS a heads-up on the bidding that’s about to commence. And thanks to the “chatter” going on about the leader of the free world’s girlfriend being up for grabs, Huck gets more digital “breadcrumbs” to follow….

What did you think of “Where’s the Black Lady?” And am I correct in thinking that Abby’s geometric dress, as damn purty as it is, was probably a bit short for appropriate White House wear?