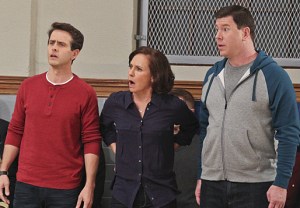 I know some Irish eyes that aren’t smilin’.

CBS has pulled The McCarthys from its schedule sooner than planned, replacing the freshman comedy with Big Bang Theory repeats effectively immediately.

The Futon Critic was first to note the scheduling change.

The McCarthys was always scheduled to go on hiatus before exhausting its 15-episode freshman run, following its Feb. 12 broadcast. (Two and a Half Men‘s hour-long series finale fills the 9:30 time slot on Feb. 19, and from there on CBS’ Thursday sitcom slate is to be as follows: new Big Bang, Odd Couple, Big Bang rerun, Mom.)

Sources tell TVLine The McCarthys technically is not yet cancelled and the four unaired episodes could see the light of day, though there is no plan at this time to broadcast them.