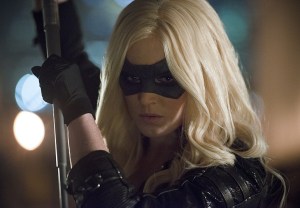 It’s double the canaries, double the fight on next Wednesday’s Arrow (The CW, 8/7c). Now, TVLine has your first look at the sisterly clash when Caity Lotz makes her return.

After Laurel gets hit with a dose of Vertigo, she hallucinates an epic battle with sis Sara — both of ’em fully clad in their costumes.

Elsewhere, Felicity continues to aid Ray with his exosuit, and Oliver — who’s back to taking on crime in Starling City — and Roy (in his Arsenal getup!) appear to be having a serious conversation with Thea.

Are they filling her in on Malcolm’s secrets or their own? Sounds off in the comments!