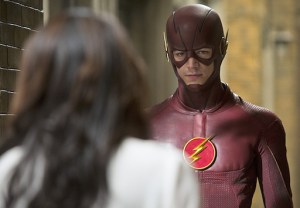 This week’s episode of The CW’s The Flash succeeded on multiple levels, from the Metahuman of the Week to some extremely fun moments to a reveal (or two?) about the speedster’s identity. Then, for good measure, a closing tag teased big, hairy things to come.

I admittedly had tempered expectations for the “Peek-a-Boo” character, as Caitlin dubbed her (“Can’t I name one?”), but she was another good example of a metahuman who distinctly neutered Barry’s own abilities. Instead, it was again up to the S.T.A.R. Labs team to find the particular Kryptonite for this baddie, here being darkness (so she can’t see where she is “going”). I also forgot that I’m a sucker for nifty teleportation effects, be it X-Men, Harry Potter or this show that used to be on TV called The Tomorrow People.

Alas for poor Peek-a-Boo aka Shawna, her OTL Clay Parker, whom she sprung from the clink, bailed on her in the end, leaving her to claim an empty cell in the S.T.A.R. Labs Pipeline. Speaking of….

Hartley/Pied Piper convinced Cisco to let him out of his cell, so that he could explain what become of Ronnie — or more to the point, why Dr. Stein never left S.T.A.R. Labs the night of the particle accelerator explosion. Analyzing security cam footage, Hartley points out how Stein — who was doing cutting-edge things with transmutation (or “making two things one”) — got caught in the dark matter blast and fused with Ronnie. After getting blindsided/KO’d by Hartley, Cisco ‘fessed up to Wells, Barry and Caitlin about how he let Hartley loose — but just as critically why, because he has carried this guilt about sealing Ronnie inside the chamber during the explosion. Caitlin forgives Cisco, saying that Ronnie himself would agree he’d made the right move.

Caitlin of course processed this info dump whilst nursing a monster hangover, having drank wayyyyyy too much the night before while staking out a karaoke bar/trying to “have a life,” with Barry. Their excursion involved a round of “Summer Nights,” in which Barry proved he’s not just fast but has pipes, too. Caitlin got so wasted that Barry had to not just race her home but also help her get out of her LBD and into her jammies. Barry does so at superspeed, but shnookered Caitlin says he deserved any peek he sneaked, because of all the “good things” he does for people.

Elsewhere in this eventful episode, Barry’s father Henry got stabbed behind bars, after helping Joe once too often with intel on Clay Parker’s boss/possible whereabouts. As Henry later recuperated in the infirmary, he made note of the front page photo that Iris took of The Flash — as well as of the fact that the speedster has twice popped up at Iron Heights, first to help Joe, and now him. In other words, Dad totally knows, and though he plays “coy,” he has this message for whomever is The Flash: “I’d tell him to be careful, then I’d tell him he’s a hero. But the most important thing for him to know is that his father’s proud of him.” Sob.

But wait, there’s even more! 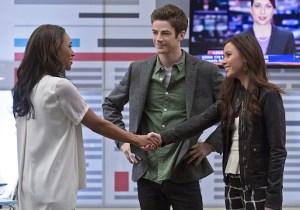 After his karaoke turn, Barry got the number of pretty Linda Park, who it turns out is a reporter for the Picture News — setting the stage for an awkward introduction when Iris assumes Barry is at her office to see her. And last but not least, in the pre-credits tag, we see that former S.T.A.R. Labs subject Grodd the gorilla has made camp in the Central City sewer system, where he keeps busy scrawling his name on the walls and abducting maintenance men.

What did you think of this week’s jam-packed episode? And do you think Iris also recognized Barry from that amazingly crisp iPhone photo she took of the fastest man alive?