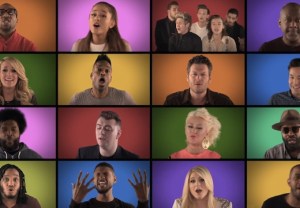 The stars came out to both sing and “sing” on The Tonight Show Starring Jimmy Fallon‘s special, L.A.-based apres-apres-Super Bowl outing.

Up first below, funnymen Will Ferrell and Kevin Hart vie against Fallon in “the Super Bowl of lip synch battles,” tackling such tunes as Beyonce’s “Drunk in Love,” John Legend’s “All of Me,” Kelly Clarkson’s “Since You’ve Been Gone” and Dirty Dancing‘s “Time of My Life” (featuring a special guest syncher). Who gets your vote for winner?

In the second clip, Fallon and house band The Roots are joined by several of today’s biggest pop stars, Brady Bunch-style, for an a cappella take on Queen’s “We Are the Champions.”