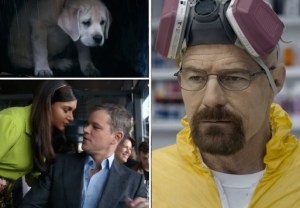 The time is night for the Super Bowl, where every year advertisers pony up big bucks (nowadays, north of $4 million per 30-second spot) to wave their wares in front of 100 million viewers.

Read our quick take on many of the commercials from Super Bowl XLIX, and then share your own reviews in Comments.

JURASSIC WORLD | Want now. That is all. [TOUCHDOWN]

TOYOYA CAMRY, “How Great I Am” | Paralympic snowboarder Amy Purdy puts her best feet forward, in multiple and highly impressive ways, though there’s a unarguable disconnect with the auto sell at hand. [SAFETY]

GAME OF WAR, “Who I Am” | Supermodel Kate Upton is (barely) poured into a breastplate, in the name of touting a game app/proving she’s no actress. [FUMBLE]

TOMORROWLAND | The Disneyfile in me wants to anticipate this film more than I currently do, though every new teaser certainly helps. At least now we know there’s a rocket ship involved. [FIELD GOAL]

BMW, “Cars/Today Show” | I kinda loved this spot, if only for the flashback to how strange this whole “Internet” thing was some 20 years ago. Points subtracted for the suggested visual of Couric twerking. [SAFETY]

MINIONS, “Super Fan Spot” | Adorable, indecipherable Minion fun, though without any hint at the plot (which is some sort of time-spanning “origin” tale). Only question is whether my sons will have outgrown these guys by the time it comes out. [SAFETY]

CARNIVAL CRUISE, “Return to the Sea” | Cruise ships take a lotta knocks (for viral outbreaks, spouses pitched over railings, power outages, etc;), so this bit of PR is to be expected. Not sure if it’ll convert skeptics, though. [SAFETY]

T-MOBILE, “Save the Data” | Sure, Kim K. is “in” on the joke (about her own narcissistic rep), but did no one tell her she needs to act the tiniest bit animated when appearing on (a family friendly) video? [SAFETY]

BUDWEISER, “Lost Dog” | Clydesdale’s puppy pal gets lost out in the big, bad world, almost accosted by a big, bad wolf — but the horses gallop to the rescue. A fine addition to the annual series, if a bit dark. [TOUCHDOWN]

NATIONWIDE, “Invisible Mindy” | Mindy Kaling’s insurance company has left her feeling invisible, so she makes the most of it — yet comes up just shy of macking on Matt Damon. A clear message smartly executed. [TOUCHDOWN]

COCA-COLA, “#MakeItHappy” | A spilled Coke turns allllll of the Internet’s hate into love. If. Only. A beautiful sentiment. [TOUCHDOWN]

DORITOS, “Middle Seat” | Cute premise — guy wards off possible seat mates, with an eye on a pretty blonde prize — if you forget that airlines by and large are not general admission seating. [SAFETY]

NISSAN, “With Dad” | Aww, geez. As “Cat’s in the Cradle” plays, a kid grows up watching his race car driver dad repeatedly brush up against death on the track — until one day Dad shows up to get him from school. [FIELD GOAL]

MCDONALD’S, “Starting Tomorrow” | For a college senior thesis, we had to come up with a campaign/idea for Burger King. I really wish we had thought of “Pay With Lovin.'” Just brilliant. [TOUCHDOWN]

ESURANCE, “Sorta Pharmacy” | Like the Lohan spot, ‘cept Greg Your Pharmacist is, in some insurers’ eyes, the same as Walter White. The Breaking Bad sequel we didn’t know we’d get. [TOUCHDOWN]

SQUARESPACE, “Ohm” | Presumably just a teaser for a later spot? Or is the sell simply, “You could ostensibly build a website about Jeff Bridges chanting”…? UPDATE: DreamingWithJeff.com is a real website, shilling the actor’s album of get-to-sleep tunes. Or something like that. Still, the ad’s a [FUMBLE]

NOMORE.ORG | This NFL-produced anti-domestic violence PSA is stealthy in its approach, then chilling once the situation becomes clear. (No grade.)

TOYOTA, “My Bold Dad” | Damn… I have sons, yet that was… [Sniffle] Um, anyway, so… Weep-tastic sentiment, for sure, but iffy on the Toyota of it all. [FIELD GOAL]

CARL’S JR., “Au Naturel” | A model seemingly au naturel struts through a farmer’s market, cuing many a Benny Hill-esque sight gag. (The melons are… well, you get it.) But the true distraction is the all-natural product’s improbably gargantuan size. Or does she just have small hands? [FUMBLE]

CLASH OF THE CLANS, “Revenge” | Bested on a gaming app, “Lee-um” Neeson goes all Taken on BigBuffetBoy85. Add in the “Angry Neeson” musical sting, and you get a [TOUCHDOWN]

JEEP, “Beautiful Lands” | “This Land Is Your Land” now encompasses not just America but apparently the globe, as illustrated in this spot for the new Renegade compact SUV — the first U.S.-market Jeep to be manufactured abroad (in Italy). Message of global unity, or whiff of PR spin? [FUMBLE]

LOCTITE, “Positive Feelings” | I had never heard of Loctite, and now I have, and I also know they’re got a fun attitude. What more could one ask for, when speaking to 100 million viewers? [FIELD GOAL]

BUD LIGHT, “Coin” | I grew up in the heat of Pac-Man Fever, so why did this spot feel so flat for me? It just seemed a bit random. But points for the realization of a real-world, life-sized videogame. [FIELD GOAL]

TED 2 | Ted and his girlfriend Tami-Lynn want to make a baby, and apparently they want/need Tom Brady’s sperm to do it. “A perfect spiral!” But for now, just a [SAFETY].

DORITOS, “When Pigs Fly” | How has this painfully obvious concept not been done 1,000 times before? (Or has it?) [FUMBLE]

SKECHERS, “Pete Rose” | All Pete Rose wants to do is be in “the hall” — at his home — whilst wearing his comfy sneakers. We’ll allow it, even if his wife won’t. [SAFETY]

What were your favorite ads?