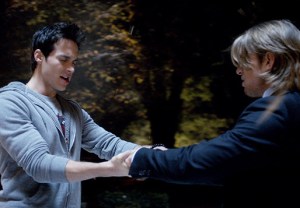 Thursday’s Vampire Diaries made good on its promise of a heartbreaking death, though probably not the one fans were expecting.

Luke and Liv’s very good-looking father came a-callin’ this week to begin his children’s merging process — you know, like any good father would — but his master plan hit a few bumps along the way. The first bump came courtesy of Tyler, who physically got between Liv and Papa Parker to stop the initial merge. It was a nice reminder of what a hero Tyler can really be… as well as a nice reminder that he’s actually still around. (I was starting to think he’d joined Bonnie in 1994.)

Bump No. 2 was a bit of a group effort, so try and follow along: Damon woke up Kai, who attempted to merge with Jo, who was ultimately saved by her brazen little brother — who, totally beside the point, is in desperate need of a haircut. Anyway, Luke attempted to merge with Kai himself (Gemini twin rules be damned!) and, frankly, things didn’t really go his way. A gust of wind, some heavy chanting and… BOOM! Dead.

(Is it bad that I’m secretly glad Kai won? I mean, Luke’s great an all, but I’ve grown more attached to that menacing psychopath than Elena’s calculator.) 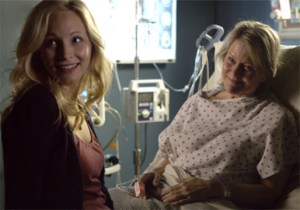 MOM’S THE WORD | In the grand spectrum of familial blurtings, “I killed my mom!” is among the worst, yet that’s exactly what Caroline said Thursday when she discovered that her blood not only sped up Colin’s cancer, but also turned him into a vampire. He’s now a “Stage 10” cancer patient, which even Jo admitted is “not a thing,” yet he’s incapable of dying — a grim fate that Sheriff Forbes now has to look forward to herself. Fans’ worst fears were nearly realized when she flatlined, but Caroline’s Emmy-worthy tears of pain and desperation brought her back to the land of the living. (I mean, I’m no doctor, but I’m pretty sure that’s what did it.)

As if that wasn’t devastating enough, Sheriff Forbes had a message for Stefan upon her waking: “When I’m gone, Caroline is going to need you,” she told him, adding that her daughter will need someone who can “make her smile.” At this point, if your heart isn’t in tiny pieces on the floor — pieces which curiously spell out “Steroline” — you might want to check to make sure you’re still human. 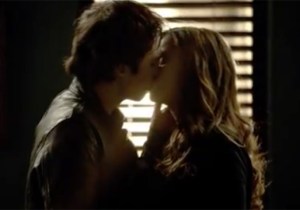 A KISS AFTER NOT DYING | Fortunately, one good thing came out of Sheriff Forbes’ brush with death: the long-awaited reunion of Damon and Elena’s mouths! At the top of the hour, Elena turned down Damon’s request for a date — he proposed a French flick, followed by eggplant that’s “so good, you’ll think you’re eating people” — because they’d already done that, and she considered it “cheating.” Well, after nearly losing her best friend’s mom in her arms, Elena didn’t really care about “rules” anymore, laying a big ol’ kiss right on Damon’s face hole. It was the king of sweeping reunion we’ve seen countless times between these two, yet for some reason, it just never gets old.

All right, TVD-ers, let’s talk: Are you glad Kai won the merge? Are you relieved to see Damon and Elena back together? And is there any hope for Sheriff Forbes? Dry your tears, then drop a comment with your thoughts on the episode below.