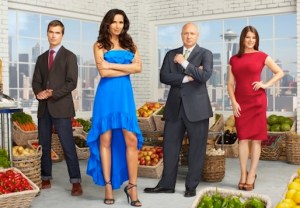 The kitchen will remain hot on Top Chef.

Bravo has renewed the reality competition series for Season 13.

Additionally, the network has put out a casting call for the next edition, airing this fall.

* Battlestar Galactica alum Michael Hogan has joined the cast of FX’s anthology series Fargo, The Wrap reports. The actor will appear in Season 2 as Otto Gerhardt, a wheelchair-bound criminal kingpin.

* NBC’s upcoming limited series The Slap has tapped Blythe Danner (Will & Grace) to guest-star as the mother of Uma Thurman’s character, per EW.com.

* Georgia King (The New Normal) will star opposite Danny McBride (Eastbound & Down) in HBO’s comedy series Vice Principals, our sister site Deadline reports. The show revolves around a high school and the vice principals who almost run it, one of whom is played by McBride. King costars as an idealistic English teacher.