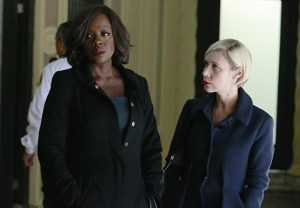 This week’s episode of How to Get Away With Murder is brought to you by the letters “O,” “M” and “G”.

Even though the ABC drama’s midseason premiere picked up after the events of Murder Night — meaning there were no blood-spattered faces, no ominous choruses of “Jingle Bells” and no shots of Michaela sobbing in the fetal position — Thursday’s hour didn’t let up on the drama.

In one corner, there was Rebecca’s court case, as Annalise tried to get the charges against her dropped. It wasn’t easy, but after evidence against Sam mounted — DNA results that revealed he was the father of Lila’s baby; an abortion clinic security video that indicated he wanted Lila to terminate her pregnancy against her wishes; laptop data that proved Sam was indeed at the sorority house the night Lila was murdered — Annalise was successful in clearing Rebecca’s name.

In the other corner, there was an intricate web of relationships, romantic (Asher and Bonnie are not on the same page about their bedroom rendezvous) and otherwise (Annalise spills the murderous beans to Frank, but makes him promise that Bonnie will never know).

Keating Five (or Four, given Asher’s utter oblivion to what went down on Murder Night), it didn’t take long for them to start turning on each other, as Laurel, Michaela and Connor made plans to turn themselves into the police — plans that were squashed by Annalise, who promised she would get them out of their sticky situation. That will be a lot easier said than done, given the arrival of Sam’s sister, Hannah Keating (played by Marcia Gay Harden), who has a number of bones to pick with the professor.

And those are just the highlights of what went down this week.

TVLine chatted with the cast of HTGAWM on set to discuss the jam-packed hour and what awaits each character in the second half of the season. 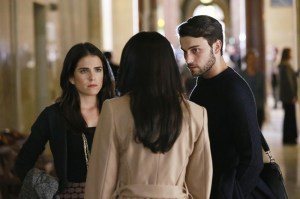 SISTER IN LAW | Viola Davis promised that Hannah’s presence will reveal much about Annalise’s past. “The dots will start connecting in terms of how she and Sam met, what my connection was with his family,” Davis said. “You’ll start to see why Annalise is the way she is.” Added Karla Souza: “We start seeing how Mommy is put in her place by someone else.”

But Hannah will also have an interesting influence on someone with whom Annalise is very close: Bonnie. “She may help Bonnie in realizing that things are probably not as they seem,” Liza Weil said of her in-the-dark character, who still believes Sam has “gone rogue” and is merely missing. “[Hannah is] going to be a catalyst for Bonnie wanting to piece it together for herself.”

MOMMIE DEAREST | One major question continues to loom, now that Annalise is aware of Sam’s murder: Why is she helping The Keating Four, especially Wes? “That’s really difficult for Wes to understand, and it’s one of the obstacles in the way of their relationship,” Alfred Enoch said. “Maybe she respects him. When you enter a complicated sphere, it’s hard to cleave to your principles in that way. Maybe she feels for him.” For Davis, the answer is much simpler: “She feels responsible [for the murder],” she shared. “She feels like she was complicit in it, and it’s her demented way of being maternal.”

Speaking of the mother-son relationship between Wes and Annalise, which has often bordered on sexual, Davis confirmed that “it’s just a maternal relationship. But I don’t think she’s great at it. She’s awkward. You would probably feel uncomfortable around her. I wanted her to have a weird sense of boundaries.”

BOILING POINTS | The other woman in Wes’ life, Rebecca, will also begin to pose problems, especially after expressing concern that Wes wasn’t acting jittery enough in Thursday’s episode. “They’re actually faced with the mechanics of being together now,” Katie Findlay said of the pair’s upcoming relationship woes. “They boil in this apartment. They do love each other, but what could possibly develop properly in that environment? Watching them try to explore what they’ve built — because they built it in such a hurry — is heartbreaking in the next couple of episodes.”

TRUST ISSUES | As for the Keating Four, who are trying to return to their normal, pre-murder lives, the shifting alliances that began in this week’s premiere are just the tip of the iceberg, according to Jack Falahee. “It’s definitely going to be a teeter-totter of trust between them for the next couple of episodes,” he said.

“What’s funny is, at the beginning of the show, Connor and Michaela are the ones who you would think would be in control. But they’re the kids now,” Souza added of Laurel’s classmates, who were the first to crack under the pressure of police questioning. “You have no idea what they’re capable of. The person you least expect it from is going to be the one that does it.”

What did you think of How to Get Away With Murder‘s midseason premiere? Grade the episode via our poll below, then hit the comments to back up your choice! 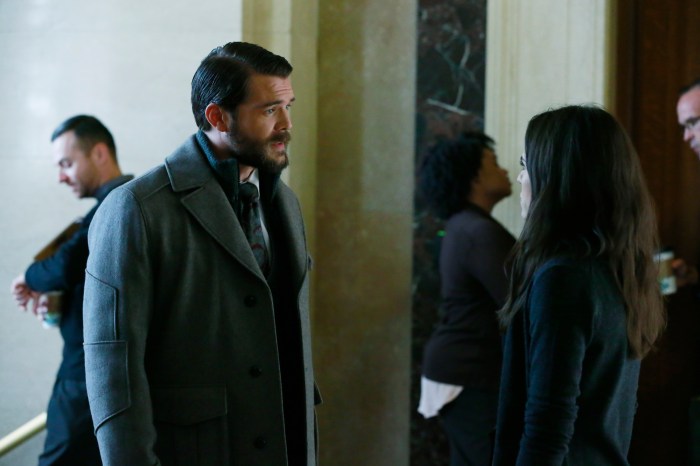