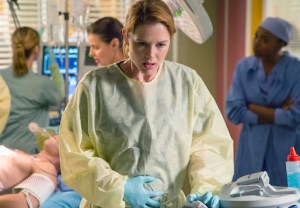 Laughter may be the best medicine, but it sure didn’t get prescribed a whole lot in the midseason premiere of Grey’s Anatomy. While Derek prepared for his move to D.C., lest he and Mer honor their “till death do us part” vow by killing one another, Jackson and April reeled from the revelation that their baby has osteogenesis imperfecta, and a mother drove off a bridge with her kids in the car. On a lighter note… well, keep reading. We’ll get to the lighter note when we get there.

PUTTING THE “GOOD” IN “GOODBYE” | Picking up right where the winter finale left off, “Where Do We Go From Here?” opened with Derek and Mer still fuming from their blowout. She was so livid, in fact, that she threw away their Post-It’d wedding vows. (Wow.) By the next day, he was gone, and she was looking for a nanny. When Owen sorta gently encouraged her to talk to Cristina, Mer admitted that she’d begun missing their regularly scheduled calls. Though she killed it at work – proving that insulinoma, not madness, had caused bridge-diving mom to take the plunge – she was simultaneously unraveling. “I need a person,” she said, breaking down in front of her potential nanny. A person “who is in it with me and believes in that.” But – and lighter notes don’t get much brighter than this – it turned out she already had a person: Derek. That evening, when we expected her to phone Cristina, she actually called her husband. “I don’t want to fight anymore,” she told him, “and I don’t want you gone.” Since technically he wasn’t gone yet – he was still stuck at the airport – he could come home for the night, he suggested. No, she replied. “In a good way, go. We can do this.” And, although his last words to her as his cell cut out were, “Meredith, I’m losing you,” it didn’t seem like he really was anymore. She even retrieved their Post-It’d wedding vows from the trash and rehung them, broken frame and all. (Great metaphor for love, eh?)

THE WORST OF TIMES | Having learned from Stephanie (off screen) that his and April’s baby was doomed, Jackson broke the news to his wife, who – in spite of the shock – immediately went back to work. When he had Owen pull her from surgery, she picked a fight with her husband, and in turn, he broke down in a supply closet in front of Richard. Later, she lit into Stephanie for not telling her that she’d seen something in that fateful ultrasound before telling anyone else, and raged at Callie over the injustice of a mother blessed with children driving them off a bridge, potentially to their deaths. When Jackson informed her that a tumor had taken away the mother’s control, April began to lose it. “Why would God let that happen?” she railed. Since that’s a pretty unanswerable question, Jackson moved to hold her, and she asked him not to. If he did, she’d start crying, she said, and she’d never stop. Sadly, the tears came, anyway. “Did I tell you it’s a boy?” she asked, sobbing. “We’re having a boy.”

HEAD CASE | Before Arizona had worked up the nerve tell her mentor that Amelia thought she could save her life, Herman found the scans of her tumor and deduced what Robbins had done. At first, it appeared that – broken laws be damned – Herman wasn’t pleased simply because Herman is never pleased. But in fact, she had a great explanation for her continued upset: Hope is the worst symptom of her condition. So she didn’t want any more of it, thank you very much. However, after Arizona blasted her for blowing off a chance that Jackson and April only WISHED their baby had, Herman had herself a weepy moment alone and finally let Amelia present her plan of attack. This is doable, Shepherd said. But “we need to do this now.” Though Herman agreed to the treatment, she insisted on waiting until the last possible moment. Until then, she was determined to keep teaching Arizona and living her life.

OK, so what did you think? Were you relieved that MerDer got a happyish ending, at least for now? Are you hoping Geena Davis will stick around long-term? Hit the comments!