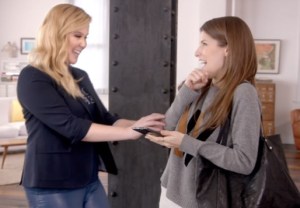 How did Amy Schumer manage to land her gig as host of the 2015 MTV Movie Awards, exactly? If you ask Anna Kendrick, she’d say it’s probably just because Chelsea Handler was unavailable.

In this first promo for the April 12 awards show, Schumer surprises Kendrick at home(?), pestering her about whether or not she’s related to Kendrick Lamar or Annie — like, the fictional musical character — prompting Kendrick to give Schumer a lesson in how names do (and do not) work.

And for all you South Park: Bigger, Longer and Uncut fans out there, Schumer inadvertently pays homage to a certain “ping-pong ball trick.” So get pumped for that.

Your thoughts on Schumer as host? Watch the promo below, then drop ’em in the comments section.