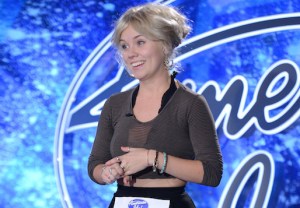 A melancholy pixie, a model-pretty belter and the type of teenage boy so adorable, Paula Abdul would want to squish his head off and dangle him from her rear-view mirror. A bubbly teenage girl sporting a bowtie, multiple shots of Season 7 standout Carly “Bury Me Alive” Smithson ensuring J.Lo never comes within 20 feet of a deranged woman wearing an ill-advised frock from the Big Bird collection, and…  Harry Connick Jr. losing his damn mind to the tune of Sia’s “Chandelier”?

Yep, American Idol‘s final audition episode of Season 14 had something for everyone — maybe even two or three possible Top 10 contenders.

And that, members of the Idoloonie Nation, is happy news — even if the terrifyingly rapid passage of time has you clutching your temples and asking, “Didn’t I just vote for Jena Irene based on her wicked cover of ‘Creep’ like three weeks ago?”

Wait, how did I wind up infusing my recap with decades-old LL Cool J lyrics? On second thought, don’t ask! Let’s instead cut to my countdown of tonight’s seven Golden Ticket recipients, in order of least- to most-promising: 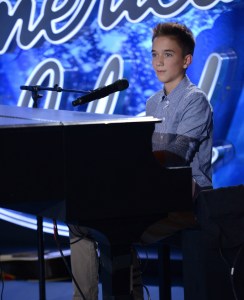 7. Daniel Seavey, “Hallelujah”/”Straight Up” | Does this multi-instrumentalist cutie-pie possibly have a future in music? Sure! Is his rusted-trunk-in-the-attic vocal creak appealing? Yeah, even though it’ll probably only last him another three or four months ’til his voice finishes changing. Did I actually believe him as he delivered the lyrics to Leonard Cohen’s “Hallelujah” — let alone Paula Abdul’s “Straight Up”? No, I can’t say that I did. And that’s why the judges should’ve told him he had an automatic pass to Hollywood Week — in Season 16. What’s more, his post-audition zinger about hoping to score J.Lo’s number made me a little queasy. That’s the kind of thing you expect from a teenager hanging around with a homemade sign outside the Today show studio — not one booked to perform there.

6. Jaq Mackenzie, “You Waste My Time” [original song] | Like Harry, I appreciated the seriousness with which this 15-year-old approached her craft — and her original song wasn’t half bad — but there was something a tad strident, perhaps underformed, about her sing-speak vocal style. Even though J.Lo voted yes, her “you have the makings of a great artist — some day” rang truest.

5. Tyanna Jones, “Wings” | There was something truly captivating about this soulful 16-year-old, from the way she radiated light and positivity the moment she walked into the audition room to her quirky, bow-tied sense of style. Another plus? A big, booming, robust voice that was able to capture the upbeat message of Little Mix’s hit? Not so positive? I heard enough nervous quavering in her vocals to make me doubt her ability to handle a live-show situation. And if you think I’m being too harsh, let me offer you two words: Malaya Watson.

4. Adanna Duru, “You and I” | One-time Voice contestant has a springwater clear tone and no shortage of horsepower — I even heard a little bit of LaBelle-ian gusto when she hit the chorus — but Adanna lost just a tiny bit of control in the final moments of her Lady Gaga’s gorgeous ballad. Still, with a smidge of improvement, she could be a true contender. 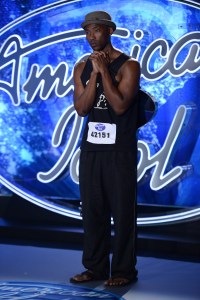 3. Rocky Peter, “Wrong Places” [original song] | I wish the show’s producers had told us what country Rocky’s dad abandoned him in — one of my pet peeves is when people say “Africa” like it’s not an entire continent — but that nagging detail went “poof” and disappeared when Rocky hit that long and stirring glory note that brought home all the angst and beauty of his mournful ditty. I don’t know why Keith was so concerned that Rocky’s artistry might not be compatible with the “Idol journey” — likability, a distinctive tone and an ability to communicate emotion aren’t enough? — but Hollywood Week will tell the tale, I suppose. (Watch, now that I’ve said that, Rocky will get axed in a 10-second montage with no explanation and join the ranks of Deanna Brown, Sarah Sellers, and Tami Gosnell and so many other “what the heck just happened?” hopefuls.)

2. Tara Honda, “I Feel the Earth Move” | I know we didn’t get ant backstory or interview time with Tara, but this husky-voiced soulstress delivered Carole King’s jam with a gruff sensuality that made me more intrigued than any shticky banter with Harry could ever achieve. Let’s label her an underdog to watch and hope she doesn’t wind up with her hands around some rival’s throat during group rounds, eh?

1. Hunter Larsen, “That’s Life” | I worried Per Blankens & Co. were setting up the tattooed, dancing nanny/hostess/flower shop worker as a marginal, mockable wannabe. But the minute Hunter opened her mouth and gave “That’s Life” an understated, melancholy twist, it felt like the first blast of air-conditioning radiating from an office lobby on a scorching summer day — cool, soothing and exactly what you were looking for (even if you weren’t necessarily looking for it).

On that note, let me pass the mic to you. Who were your faves from Night 2 of the Season 14 San Francisco auditions? Take our poll below, then hit the comments with your thoughts!