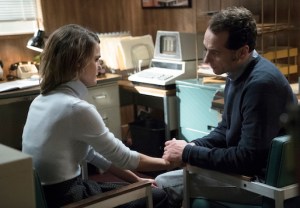 Two ops go irrevocably awry in The Americans‘ third season opener, and not even all the vodka in Vladivostok can make things right.

But that’s probably a good thing; you — and the Jennings — are going to want a clear head to handle everything that goes down during the hour.

We’ve got the death of one of Philip’s operatives! We’ve got two characters exploring the Kama Sutra in sweaty, naked detail! We’ve got Elizabeth physically fighting FBI head honcho Gaad! We’ve got the exchange of a bake-sale brownie! (Believe me, that last one is just as important as everything that comes before.)

Lock yourself in the laundry room and make sure no one’s listening, because here’s some very important intel on what happens during “EST Men.”

CHICKED | Elizabeth takes a bath, has a memory of the time she threw a scared little Paige into a community pool, plops a blonde bowl-cut wig on her head and then heads out to meet a disgruntled CIA employee. #Idon’tknowhowshedoesit.

The pathetic government worker hands Elizabeth a list of names of agents involved in the increasingly bad situation in Afghanistan, then heads to the bar’s bathroom and drunkenly realizes just how terrible her actions really are. (Been there, sister.) She makes a phone call and confesses what she’s done; soon, the Feds are in pursuit of Elizabeth, who’s faux-nonchalantly beating it the heck out of there.

Two men, one of whom is Stan’s boss Frank, approach her and receive a beat-down for their trouble. But the guys know what they’re doing, too; the other agent grabs Elizabeth from behind and nearly suffocates her with a chokehold, but she knocks them both into the path of an oncoming motorcycle and escapes in the aftermath of the crash.

Upside: She got away with minimal injuries (though that bruised shoulder looks gnarly, and spitting blood is never a good thing). Downside: As she sadly tells Philip after he returns from a night spent at an EST seminar (aka Sandra’s cult) with Stan, she lost the list of CIA names during the scuffle. “We’ll get in,” Philip assures her, pulling her close.

IN WHICH WE LEARN NINA’S FATE | The next day at the FBI, Stan jokes with Frank about a woman taking him down, but Stan’s the one about to be laid low: Gaad informs him that Nina was convicted of espionage and treason in the motherland that morning. (Elsewhere, we learn that Oleg tried to have his father intervene on her behalf, but Papa wouldn’t budge.)

Also possibly important for later: The FBI grabbed the list Elizabeth dropped, but the CIA took it away before anyone could see the names on it.

I BELIEVE THE CHILDREN ARE OUR FUTURE | But what about potential-maybe-future-baby-spy Paige? We find out Elizabeth’s been cozying up to her by going to church with her — we even see Mama Jennings singing a hymn with her daughter and folding flyers for an upcoming youth group event.

And though Philip may not be on board with the philosophy, he’s psyched about the mother-daughter bonding… until the spies have dinner with their newly returned former handler Gabriel, and Elizabeth talks about her daughter as though she’s filing a progress report on a gullible mark. (Matthew Rhys’ face as Philip realizes his wife’s real motivations, by the way? Perfection.) Also: Who else had completely forgotten about Freusen Gladje until tonight?

Elizabeth later denies Philip’s claims that she’s “assessing” and “developing” their daughter, saying that she only told Gabriel what Directorate wants to hear, but Philip is unconvinced. Commence glacial intraspouse shunning!

Philip meets with the crazy Annelise — whose relationship with Pakistani ISI agent Yousaf, he hopes, will produce the names Elizabeth lost while kicking Gaad’s tush — and swings by for a sweaty (and, by the looks of it, successful) Kama Sutra session with Martha. 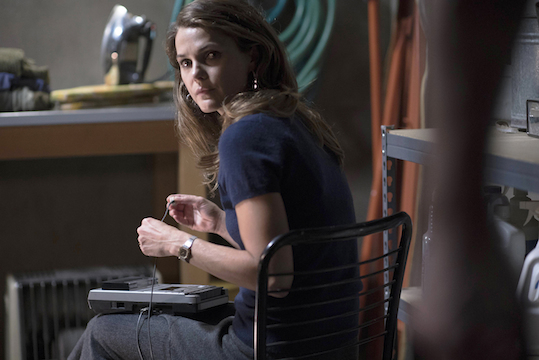 He finally makes up with Elizabeth after she proffers a brownie baked for a youth-group fundraiser and informs him that she’s learned (via a tape delivered by Gabriel) that her mother is dying.

ADIOS, ANNELISE | Don’t worry — things are about to get worse. Annelise thinks she’s in love with Yousaf, so when he asks her to move to Zurich, she agrees. But first, she wants to unburden herself… something that makes Philip, listening through the hotel-room wall, very nervous. And because the sounds of coitus are so similar to the sounds of being choked to death, Philip doesn’t enter Annelise’s room until it’s too late: Yousaf has killed her. As the ISI agent pulls on his clothes, Philip starts to talk about how he can’t undo the murder, “But I can help. I can make this go away.” And Yousaf? He looks intrigued.