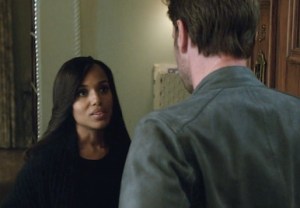 When ABC’s Scandal resumes Season 4 this Thursday at 9/8c, no time will have passed since Olivia went missing in the midst of a piano-top tryst with Jake.

And then, less-than-no time will have passed…?

“No time will have lapsed,” series creator Shonda Rhimes states. “And negative time will have lapsed.” Meaning, there likely will be a tiny jump backwards, to shed a bit more light on what exactly went down when Jake jogged down the hall to fetch that crucial blanket/pushin’ cushion (as recounted in the promo below).

Given Scandal‘s standing as the most secretive of the Shondaland shows, Rhimes would be remiss to reveal much more about Olivia’s vanishing, other than to confirm, “It’s definitely not going to be a one-episode, short little thing.” Rather, Liv may be missing — yet still on screen, don’t you worry — for weeks.

And while one might surmise that the abduction of the leader of the free world’s girlfriend and the West Angola of it all was cooked up to spark a big, new, Defiance/Remington/Albatross-like mythology, Rhimes counters, “The big new thing it triggers is Olivia.”

Elaborating on that pronouncement, she says, “We’re taking Olivia to a place that she hasn’t been before” (and the uberproducer doesn’t mean geographically). With this storyline, “We are growing Olivia in a different direction. And we are growing the show in the direction that we’ve been headed towards for a while.

“It’s going to be an interesting left turn for the audience,” Rhimes adds, “but it is definitely still Scandal.”

Of course, when last we tuned in, Fitz was livid to learn that Andrew Nichols had targeted Liv in the name of leverage, after the Grant administration failed to declare war against West Angola (an act that would have lined Andrew and RNC honcho Lizzie’s pockets with kickbacks). Does the vice president indeed have his boss by the short hairs? “I think he thinks he does,” Rhimes answers. “He hopes he does.”

In discussing the overall state of the Fitz/Olivia dynamic, it is suggested to Rhimes that POTUS has acted a bit more aggressively as of late, perhaps motivated by his lady love’s growing closeness to romantic rival Jake Ballard. (See, for example, the clip below where Fitz repeatedly beseeches Liv to “kiss me,” whereas in days past their lips would meet up in a jiffy.)

While deeming that view “interesting,” Rhimes maintains that Scandal‘s commander-in-chief is the same as he ever was. “I actually don’t think that that is true — I think Fitz is never more aggressive than he was in Season 2…. I don’t find him as being more aggressive at all. It feels the same to me.”