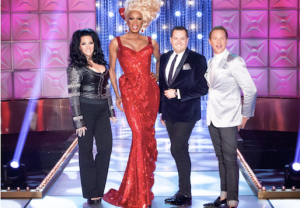 RuPaul’s Drag Race finally has a Season 7 premiere date — and a reconfigured judging panel, too.

Logo announced today that a new collection of queens will be lip-syncing for their lives starting Monday, March 2 at 9/8c — with Ross Matthews (Chelsea Lately) and Carson Kressley (Queer Eye for the Straight Guy) replacing Santino Rice as permanent judges alongside RuPaul and Michelle Visage.

Rice, however, will return as a guest judge.

“Yes, Virginia, there is a gay Santa Claus!” said host and executive producer RuPaul, in a release. “I asked for a new, wickedly funny, smart and experienced judge…and I got two! Ross and Carson are the perfect addition to the RuPaul’s Drag Race family because they’re not just show biz experts, they’re superfans and longtime lovers of the art of drag.”

Check out the trailer below, then weigh in on Santino’s exit — and the addition of Carson and Ross — down in the comments!