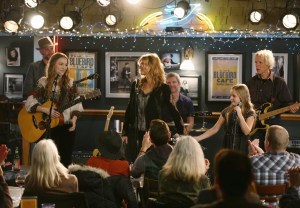 Maddie and Daphne Conrad, you have arrived.

After all, what other kid your age has played the legendary Bluebird Cafe — and with his or her superstar mother sharing the stage?

These photos from Nashville‘s Feb. 11 episode (10/9c) give us a peek at the First Lady of Country Music and her girls playing to a packed house while family and friends — like Bucky — look on in admiration.

Per the episode’s official description, Rayna battles rumors about her breakup with Luke by returning to the public eye on her own terms, and — as we see in the other photos in the gallery below — Scarlett plans a surprise for Deacon that doesn’t go as planned. (Because hysterical Beverly is really who you want around in a life-and-death crisis, Scar?)

Click through the photos, then hit the comments with your thoughts on what’s coming up in Music City!