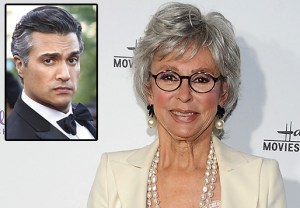 Prepare to meet the woman who gave birth to the fabulous Rogelio De La Vega.

Jane the Virgin has tapped legendary West Side Story actress Rita Moreno to play the mother of the scene-stealing soap star, TVLine has learned exclusively.

Jane’s paternal grandma — or “Glam-ma,” as she’s called — is fiercely protective of her wildly successful son. She will make her debut in Episode 18.

Moreno — whose TV credits include Happily Divorced, Oz and The Electric Company — is one of a select group of performers who have won an Emmy, a Grammy, an Oscar and a Tony (aka EGOT).