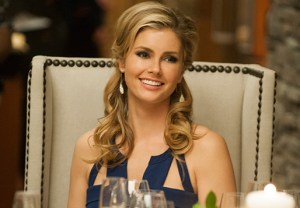 A familiar face could create quite a mess for the Devious Maids in Season 3.

Brianna Brown — whose character, Taylor Stappord, hasn’t been seen since she moved to Washington, D.C. with her husband in Season 2 — will return to the Lifetime drama as a series regular in its upcoming third season, our sister site Deadline reports.

Any guesses why the Stappords, or at least Taylor, will be back in Beverly Hills? Hit the comments with your thoughts and theories.

* Jerry Ferrara (Entourage) will co-star in the second season of Starz’s Power, our sister site Deadline reports. Ferrara will play Joe Proctor,” a successful attorney with a dark secret,” who has dealings with Omari Hardwick’s “Ghost.”

* Neil Patrick Harris (How I Met Your Mother) will be James Lipton’s first guest when Inside the Actors Studio returns for a new season, Feb. 12 on Bravo.

* ABC Family’s Young & Hungry and Freak Out will return for their second seasons on Wednesday, March 25.