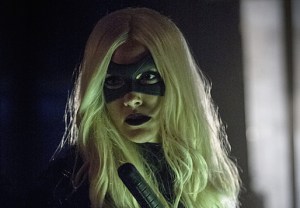 If you were among those caterwauling about it being too soon for Arrow‘s Laurel to ably assume the Canary persona, boy oh boy, this episode was for you.

At the top of this week’s episode, Laurel-as-Canary goes to save a damsel in distress, and though she gets a few licks in, she soon enough is on the losing end of the fight, her bacon only saved by Roy/Arsenal, who says: “I think we need to talk.” Uh, yeah!

The thing is, Danny “Brick” Brickwell is tearing through Starling City, kidnapping Aldermen in the name of leveraging madame mayor into pulling the SCPD from the Glades, so that the crime boss may rule unchallenged. As ADA, Laurel procures intel on Brick’s whereabouts, and uses that advantage to wiggle her way onto Team Arrow, despite Diggle’s wholly reasonable concerns. And sure ’nuff, when she and Roy go to rescue the Aldermen, Brick gains the upper hand and lobs Canary aside. Roy then puts a pointer in Brick, but that only incites the goon into popping one of his hostages, leaving Roy and Laurel laden with guilt.

All the while, with Canary seemingly back in action, Quentin believes his missing daughter to be returned — and Laurel plays along, even phoning him as Sara at one point. Then, rallied by Felicity — who has rejoined Team Arrow after learning a lesson from Ray about fighting for the people we care about — Laurel suits back up and a new offensive is launched at Brickwell. This time, Roy and Laurel score more hits than misses, and even when Brick corners Canary, she makes a splashy getaway by leaping through a window and grabbing onto a ladder dangling from Ray’s borrowed helicopter. Later, Quentin again talks to “Sara” (obscured atop a fire escape, in shadows), wondering why she’s avoiding him. She promises to explain everything, another time.

Elsewhere in Starling City: Malcolm scolded Thea for not packing to leave town, but she challenged his reasons. Ultimately, Dad came clean with a version of the truth about Ra’s and why the League put a target on his back. Thea, though, shows some glorious gumption by countering, “Why not stay and fight? Why ask me to be afraid now? My father taught me to stand my ground… [Ra’s] should be afraid of us.” A lovely sentiment, but as we later see, Thea’s DJ crush is actually a League mole, who reports to Sarab that Merlyn has no plans to leave Starling.

Meanwhile, on Oliver’s side of the story….

Recuperating with herbs and penicillin, Oliver urges Maseo not to return to the league, fearing he’ll pay the ultimate price for betraying Ra’s al Ghul’s wishes. But, as Tatsu notes, whereas Maseo might listen, he who is now known as Sarab will not. The debate is interrupted by the arrival of several League members suspicious about the tracks leading from Oliver’s death site to this cabin. A fight breaks out, and Maseo and Tatsu dispatch with the lot of ’em. Afterward, Oliver invites Maseo to return with him to Starling City, but Maseo seems resigned to returning to the League. (In flashbacks, we saw that Maseo was willing to cede the Alpha thingamabob to China White, in trade for Tatsu, explaining to Oliver, “There’s nothing I wouldn’t do for family.)

ARROW POINTS:
* “Well, they’re not lasers. That’d be ridiculous. They’re compressed hard light beams.”
* “You can’t fix this with money, Palmer.” “I don’t know, I’ve got a lot of money.”
* “I’d feel a lit more competent in your aeronautic abilities if for instance you knew that helicopters don’t have keys.”
* Question: If you’re one of the two surviving Aldermen, when this Canary shows to rescue you, are you almost like, “Nah, we’re good”?

What did you think of “Midnight City”?