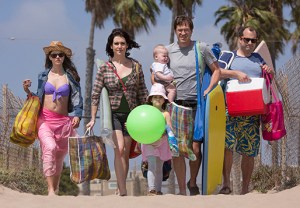 HBO has developed a sense of Togetherness with its newest comedy, leading to a Season 2 renewal for the freshman series.

From brothers Jay and Mark Duplass (The Mindy Project), the series follows married couple Brett (Mark Duplass) and Michelle (Melanie Lynskey), who are struggling to rekindle the spark in their relationship. When Brett’s friend (Steve Zissis) and Michelle’s sister (Amanda Peet) move in with them, the foursome try to continue following their personal dreams while living under the same roof.

“We began our love affair with HBO in our parents’ living room in 1983, and to have these brilliant creative people put a ring on our fingers with a second season of Togetherness is a real-life dream come true,” the Duplass brothers said in a statement.

Togetherness is set to begin production on Season 2 in Los Angeles later this year, with a debut in 2016.