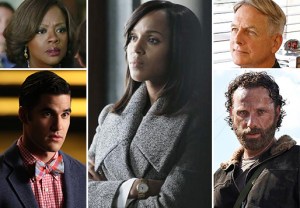 Question: Hi, Aus! Totally love Ask Ausiello. I read it religiously. I would love some scoop on my latest obsession, HTGAWM. —Andrew
Ausiello: There are no sex scenes in Thursday’s midseason premiere. I. Kid. You. Not. The episode is coitus-free. But what the hour lacks in nooky, it makes up for in awkward morning-after energy (I’m looking at you, Bonnie and Asher) and additional Murder Night flashbacks (you’ll learn just how involved Annalise was in the events of the evening). Bonus Scoop: While EP Pete Nowalk doesn’t want to spoil what role Oscar-winner Marcia Gay Harden has signed on to play, he’s kind enough to provide a little tease. “We meet her character at the end of [Thursday’s episode]. She plays this really powerful, smart woman to be in scenes with Viola,” Nowalk says. “You can expect their interactions to be big and emotional.”

Question: After the episode where Gibbs’ and Fornell’s ex-wife was shot, will NCIS address what happens to her child with Fornell? —Joy
Ausiello: As a matter of fact, the Feb. 17 episode, titled “Cabin Fever,” will deal with many of the reverberations of Diane’s tragic death — as felt by the men in her life as well as daughter Emily. “There are some really brilliant moments between Mark Harmon and Joe Spano, as they spend some time in Gibbs’ cabin and hash out some of the issues they’re both facing because of that loss,” showrunner Gary Glasberg previews. “And Emily makes an appearance too — it’s all part of what Fornell is carrying right now. He’s having trouble, and Gibbs is there as a friend.”

Question: Do you have anything on the Kurt/Blaine situation? They cannot possibly go their separate ways at the end of Glee. —Clementine
Ausiello: Oh, great — another question about my favorite TV twosome! Friday’s episode pretty much revolves around the future of “Klaine,” and let’s just say that Sue puts them in a very uncomfortable position in the hopes of them making it… more comfortable. (Trust me, it’ll make a lot more sense on Friday.)

Question: Could you provide any insight into how this ‘Samchel’ storyline will unfold on Glee? —Samantha
Ausiello: Well, Samantha, I’ve got some news — though whether it’s “good” or “bad” depends on how you feel about Sam and Rachel’s potential future together. This Friday’s ep continues Sam’s hypnosis storyline, with him relentlessly pursuing Rachel. And, call me crazy, but it seems like she’s starting to like all the attention.

Question: I’d love something on Thursday’s Scandal return.
Ausiello: You won’t have to wait long for an answer to the question, “Where in the world is Olivia Pope?” And I think you’ll find her whereabouts alternately shocking and hilarious.

Question: I love the new season of Shameless! Any scoop on Ian and Mickey? —Alex
Ausiello: Things are about to get really bad for the couple. But rest assured, Mickey will stand by his guy — even when Ian puts someone else’s life in jeopardy.

Question: We’re not going to have to wait until the Sleepy Hollow season finale to find out why Henry killed Moloch, are we? —Gabriella
Ausiello: Not according to Tom Mison. “There’s going to be a little bit of ambiguity to begin with, but it becomes very clear” soon after Henry makes his presence known, the actor says. He also cagily adds, “I’ll remind you that he didn’t only kill Moloch, he saved Ichabod and Katrina,” so make of that what you will. 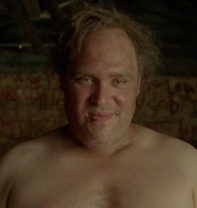 Question: Dude, we’re dying. Can we please get…anything on Hannibal? —Ro
Ausiello: True Detective‘s Glenn Fleshler — he was lawn-mowing murderer Errol — is joining the NBC thriller as… another scary dude. I’ve learned exclusively that the actor has been cast as Cordell, the personal doctor of the disfigured Mason Verger (now played by The Divide‘s Joe Anderson). The character is described as “quiet, very intelligent and definitely creepy,” yet “attentive and gentle with Mason. He’s a professional who cares about his work, but we get a sense he might be as sadistic as his boss — and a perfect fit to become his potential henchman.”

Question: I know we’re only two episodes into 12 Monkeys, but I really want to see Cole and Cassie get together. Chances of that happening? —Molly
Ausiello: “I’m not completely ruling that out, with other variables, and they do have chemistry,” star Amanda Schull tells TVLine. Still, even if a romantic connection does happen, it won’t be for a while. “Cole and Cassie don’t just fall madly in love by Episode 2 or 3 and decide to screw the end of the world and run off to the Bahamas or something,” she adds. “They have a mission.”

Question: I’m dying for some Forever intel. (See what I did there?) —Marc
Ausiello: The ABC series’ next new episode, airing Feb. 3, is a huge one for Abe, series creator Matt Miller says. And Abe’s revelation begins in the least likely of places: with Henry’s adversary, Adam. “What we learn is that Adam… had some terrible things happen to him in his past. And he and Abe share a connection regarding World War II, and he helps Abe resolve some mysteries about his own past.” BONUS SPOILER: Miller adds that the show is in the early stages of bringing in a romantic interest for Jo. “And maybe Henry starts to get a little bit jealous, and we start to watch that play out,” he teases. 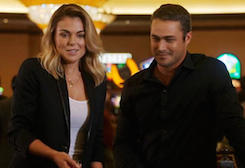 Question: What happened to Severide’s wife on Chicago Fire? —Bessie
Ausiello: She’s fled the scene, although executive producer Matt Olmstead notes that the pair remain married despite having gone their separate ways. “In the long tradition of Severide and his choices, it’s one of those things where you leave it behind and don’t worry about it,” the EP explains. “But those can come back and bite you. Way down the road, if he ever did want to get married, he’d have to go back and get the divorce he never got from Brittany.” As for whether Serinda Swan will at some point pop back in, Olmstead says he’d love to bring back the actress, “but there’s no plans right now.”

Question: I love Chicago Fire‘s Dawson and Casey. Please tell me they are going to get back together.  This is my birthday wish (which is in a few weeks). —Noel
Ausiello: Apologies for the sucky birthday present, but things aren’t looking good for those two crazy kids — mostly because Casey is going to have a little fling “with someone who may have a connection to a fellow firefighter, which he didn’t know about,” executive producer Matt Olmstead teases.

Question: Big Cougar Town fan here. This being the last season, will any of our favorites from past seasons be back? —Jim
Ausiello: I can tell you about one favorite we (unfortunately) won’t see back. “We will not [see Barb again],” Carolyn Hennesy informs us. “And I personally believe it’s really a shame. Barb was such an integral part of the funny in the first three seasons of that show, and it would have been hilarious if she appeared in the finale, dropping one more little bomb. Barb was wonderful while she lasted, absolutely fantastic. No complaints whatsoever.”

Question: Anything on Ray and Felicity’s crossover to The Flash? —Cassie
Ausiello: The pair drop by (in Episode 18) when Ray needs a little help with his A.T.O.M. suit. Not surprisingly, the tech billionaire “finds a best friend in Cisco,” executive producer Andrew Kreisberg shares. After all, he may look like Brandon Routh, but Ray likes his toys. “There’s even a line in the script where Felicity says, ‘Ray is like Barry in Oliver’s body. Oh God, did I say that aloud?'” Meanwhile, Felicity’s arrival comes “at a particularly bad moment for Barry. He’s having a crisis of conscience that in some ways only somebody like she can help him through.” 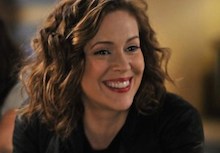 Question: Any intel on how Mistresses plans to address Alyssa Milano’s departure — if at all — in the Season 3 premiere? —Karen
Ausiello: Oh, it will be addressed, big-time. “I can’t speak too specifically about the Savi of it all, except to say that she is very much a part of our premiere,” hints showrunner Rina Mimoun, who also offers up this BONUS SPOILER: “We’re also bringing back a very special guest from Season 1 — a surprise visitor who once again wreaks havoc in the lives of one of our Mistresses…” (FWIW, Michael “Mistresses Is My Crack” Slezak things Mimoun is referring to Penelope Ann Miller’s Elizabeth Grey.)

Question: I feel I know almost nothing about Agents of S.H.I.E.L.D. for when it comes back in March. Got any scoop (that’s not cryptic)? –Andy B.
Ausiello: Dude. It’s S.H.I.E.L.D. Cryptic is what they do. That said, Brett Dalton perhaps only rated 7 on a scale of 10 when teasing for us Ward’s next move, having taken his licks (and a few bullets) in service of HYDRA and Whitehall. “He’s hitched his cart to a horse before — HYDRA— and it hasn’t really turned out so well,” the actor notes. “So, now he’s like, unhitching the cart and hopping on his own horse and going his own way.” And maybe just maybe, some day, that could lead him kinda sorta back into S.H.I.E.L.D.’s good-ish graces…? “I mean, he has a sense of right and wrong, he has a sense of duty and obligation, and I think he’s also a sympathetic character,” Dalton contends. “Though he can be heartless, it’s always in the service of something, an intention that is good. So I do feel good about his future. The writers could have given Ward a quick redemption arc, and that would have been the end of it, but they’ve left him raw, unpredictable… a complete wild card.”

Question: I’d appreciate any Season 6 Justified spoilers, but especially the odds on Raylan’s survival. —Michelle
Ausiello: I’d put the odds at 50-50 — he’ll either survive, or he won’t. (That is how odds work, yes?) As for scoop we actually can share, Episode 3 will feature a face-off six seasons in the making, when interim Chief Deputy Rachel Brooks doesn’t mince words when leaning on CI Ava for intel. “Joelle [Carter] and I haven’t worked together at all in the six seasons, so that was a really special day for me, to have Rachel and Ava come face to face,” Erica Tazel shares.