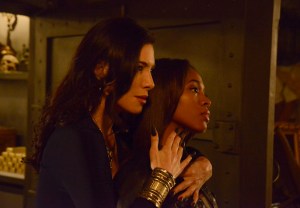 Pardon me if I sound like Saturday Night Live city correspondent Stefon, but this week’s Sleepy Hollow has everything.

Jenny kicking tail. Hawley leaving town. Ichabod and Abbie singing karaoke — both solo and together. Callbacks to prior episodes. References to both Star Wars and Meghan Trainor. And the human lie detector — It’s that thing? When Katrina uses her powers to discern an important truth about Irving? But otherwise keeps to herself for most of the hour?

The most important aspect of the episode: Abbie and Crane feel more like the Witnesses we love than they have all season. And that’s a good place to return to, four episodes before this go-around draws to a close.

Read on as we review what happens in “Kali Yuga.”

SING IT, ICH! | We open on karaoke night in the Witnesses’ favorite watering hole, where Abbie is wailing on Gnarls Barkley’s “Crazy” and Ichabod, Jenny and Hawley enthusiastically cheer her on. (Side note: If you ever need a visual for the word “rapt,” just look at Ichabod’s face while he’s watching his partner on stage. Also: Very nice voice, Nicole Beharie.) 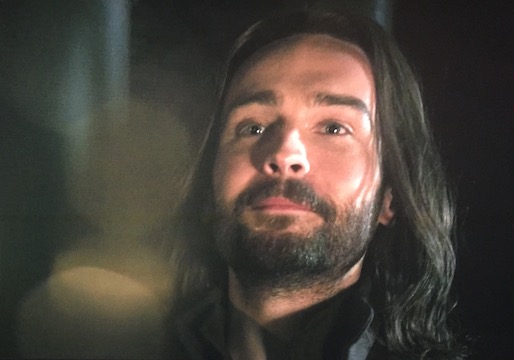 Hawley leaves to do some shady deal, but he promises Jenny he’ll be back. (And while you’re at it, please take note of Abbie’s face while she watches Jenny and Hawley say goodbye. I’d file that look under “Oh, you boning now? OK then.”)

Ichabod then gets up to sing a sea shanty about syphilis (and not the one “about the bass, ’bout the bass,” he says), and Jenny uses the opportunity to probe her sister about intra-Witness relations. “We’re fine,” Abs replies, but Jenny looks skeptical. Abbie ignores it, asking Jenny what’s up with her and Hawley… and Jenny admits that she and the treasure hunter have been plumbing each other’s troves. OK, OK — she merely admits that there’s something going on between them, but I stand by my inference.

MAMA’S BOY | Meanwhile, Hawley arrives at the transaction rendezvous place and realizes that he’s been set up: The whole thing was a cover so Carmilla, the woman who raised him, could make contact again after their decade-long separation.

Five-second backstory: Hawley’s parents died in an accident when he was 12, and Carmilla the antiquities collector/dealer (played by Defiance‘s Jaime Murray) took him in. But he ran away from her years later when he realized that she wasn’t afraid of killing people who got in her way.

As it turns out, Carmilla is now a vetala, or monster from Hindu mythology. She claims she was turned while seeking him out in India, so a guilt-ridden Hawley agrees to help her with one last job: breaking into the Knox estate to nab an artifact that will make her human again. “One and done,” he warns.

WHAT AN INCREDIBLE SMELL YOU’VE DISCOVERED | Abbie and Ichabod catch wind of the whole thing when Hawley breaks into the archives to steal the Knox (same family as Fort Knox) blueprints. Carmilla is there, too; after her fangs and nails-dripping-acid nearly do Jenny in, they decide to save Hawley from his evil surrogate mom. That means Ichabod and Katrina take care of research while the Mills sisters retrieve intel on Carmilla. Jenny earns my love (who are we kidding — she always had it) when she questions the Witnesses’ split (“You really think you work better apart?”) and then slams a shifty source’s head into a glass display case in order to shake information out of him.

Next you know, Team WTF (minus Katrina) is at a black market supernatural objects party at the Knox property, but things start to fall apart when Hawley takes Jenny’s phone and locks her in a closet. Then, Abbie and Ichabod corner Carmilla in the vault, but Hawley helps the vetala get away with a statue of the goddess Kali… then locks his pals inside.

With a limited amount of space and no distractions — save, y’know, trying to figure out how to escape — Abbie and Ichabod awkwardly acknowledge that their recent miscommunications have led to hurt feelings and a loss of control of the situation. He brings up Orion’s sigil, which he found in the tossed archives, and she apologizes for keeping it from him. He, in turn, apologizes for deciding to save Abraham without consulting her. “What if we’re not as good partners today as we were in the past? Maybe our whole thing is starting to go awry,” Abbie says, basically reading from the Twitter feeds of half of the show’s fanbase. But then Ichabod makes a bad decision about which button to push to get them out, and the walls grow spikes and start closing in (causing Abbie to make a snarky Star Wars comparison. At least you’re not up to your ear buns in trash, Abs).

HAWLEY HITS THE ROAD | Crane eventually pushes the right button, saving them from becoming Biblically ordained shish kebabs, and they make it to the location where Carmilla has drugged Hawley in order to make him a vetala like her. (No way! The bad woman lied?!) Ich deduces that a combination of fire and iron can take down the Hindu monster, so they stop a few of her henchmen while Jenny frees Hawley. A shirtless, shirtless Hawley…

Where was I? Oh yeah. Nick moves to end Carmilla’s life, but she runs away before he can do the deed. So later, he finds Jenny to tell her goodbye; he’s leaving town to find Carmilla, sheepishly telling her that now she knows why he doesn’t let anyone get close. Oh sure, the “It’s not you, it’s the fact that my faux mother is a Hindu monster” excuse. If I had a dollar for every time I heard that one during my dating years… Then they kiss, and it’s sweet, and I’m sorry that Hawley won’t be around (at least for the foreseeable future).

Meanwhile, Ichabod and Abbie realize that they have to “tend to” their bond in order to make sure things stay copacetic. In other words: Mommy Witness and Daddy Witness need a date night every once in a while. So they get up and sing the Ike and Tina Turner version of “Proud Mary,” sadly cutting out before the frenetic “DOO-doo-doo-doo-DOO-doo-doo-doo” part. 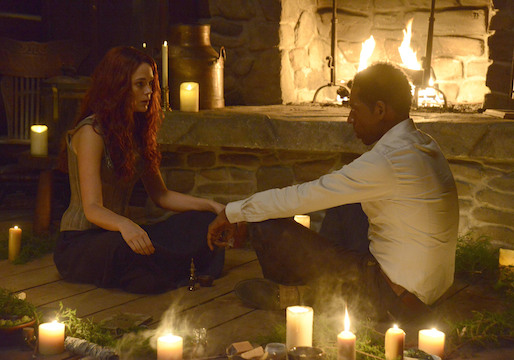 NOWHERE MAN | Cynthia, who’s representing Frank in court, is stunned when the new evidence hinted at in the last episode exonerates her back-from-the-dead husband. But still, she can’t shake the feeling that he may not be who he says he is. (Side note: I thought the “I can’t want to get home to you and Macey” thing might be a tip-off — they weren’t living together before this whole ordeal. Anyone else with me?)

So Katrina uses her powers to delve into Frank’s mind; when she surfaces, she says he has no more link to the Horseman of War. But things are certainly not back to normal, as evidenced by the fact that Frank can’t see his reflection in the cabin’s glass door when Cynthia hugs him in joy.

Now it’s your turn. Did you love the “Are you having a moment?” moment? What about the Cranes’ discussion of Mary Poppins? Theories on Irving? Sound off in the comments!