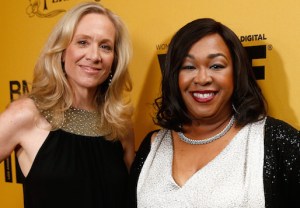 Can a fourth hour be added to #TGIT…?

ABC’s latest round of drama pilot orders include a new project shepherded by Shondaland’s Shonda Rhimes and Betsy Beers (pictured).

Penned by Jennifer Schuur (Hannibal, Hostages), The Catch is a thriller about a woman about to get married and about to get conned. Unbeknownst to her slippery fiancé, our heroine — who investigates fraud for a living — is not all she claims to be. And when the fiancé’s expertly planned con collides with her perfectly constructed lies, they plunge into a dangerous game of cat and mouse.

ABC also ordered the drama pilot The Broad Squad, from Fake Empire’s Josh Schwartz, Stephanie Savage and Len Goldstein. Penned by Bess Wohl and inspired by true stories, it revolves around the first four women to graduate from Boston’s Police Academy circa 1978.

Last week, ABC granted pilot orders to the Biblical-tinged Of Kings and Prophets; L.A. Crime, a true-crime procedural set in the 1980s; Quantico, which follows FBI recruits; Runner, about a woman who gets wrapped up in the gun trade between the U.S. and Mexico; and Mix, an hour-long dramedy about several modern families.