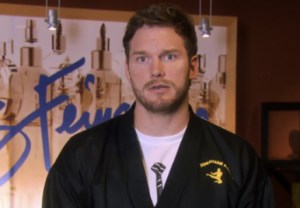 You might think Parks and Recreation‘s Andy Dwyer is nothing but a goofball on Johnny Karate’s Super-Awesome Musical Explosion Show.

But you couldn’t be more wrong.

TVLine has an exclusive sneak peek at one of Tuesday’s half-hours (NBC, 8:30/7:30c), in which Andy introduces us to his alter ego’s super-awesome — and super-serious — older brother, Jonathan Karate.

Because without Jonathan, who else would handle such heavy topics as “holding in farts”?

Press PLAY on the video below for a sneak peek at the episode, then hit the comments with your thoughts!