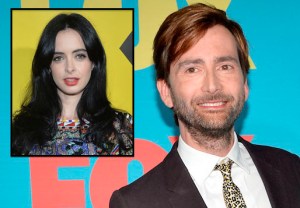 Marvel’s AKA Jessica Jones, whose 13-episode run will at some point follow that of Marvel’s Daredevil (premiering April 10), stars Krysten Ritter (Don’t Trust the B—- in Apt. 23) as the titular detective, whose specialty involves people with extraordinary abilities.

As previously announced, Mike Colter (The Good Wife) will play Luke Cage on the second of Netflix’s four superhero series, which will culminate with a Defenders miniseries.

Tennant’s previous TV credits include, of course, Doctor Who, as well as the UK’s Broadchurch (which opens Season 2 on March 4) and its one-and-done U.S. remake Gracepoint.