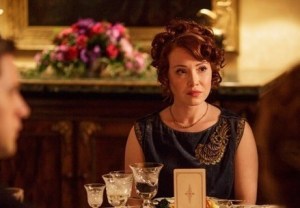 Her lessons with Daisy have apparently being going well, which of course led Robert to the conclusion that they’re interfering with Daisy’s kitchen work and stressing out Mrs. Patmore. (Danger: Intelligent Female Alert!) I was actually surprised how well Robert handled the truth when Mrs. Patmore assured him Daisy’s lessons weren’t a problem — and not at all surprised when Miss Bunting kept pushing Robert’s buttons about it.

Robert only threw down a napkin, but it might has well have been a gauntlet; even the ever-present ghost of Mr. Pamuk was seen uncomfortably tugging at his collar. Carson and Mrs. Hughes were also caught gossiping about the incident downstairs like a couple of Plastics, which I appreciated. (Kudos to the Dowager Countess, by the way, for at least attempting to keep the conversation alive.)

At this point, if she’s ever allowed back in the Abbey, I expect Miss Bunting will skip straight to cooking and eating the children. Really looking forward to her next visit.

THE BREAKUP | A fancy dress show in London set the stage for one of Downton’s most highly anticipated showdowns: Lady Mary vs. (Maybe she’s born with it, maybe it’s) Mabel Lane Fox. Mary’s exchange with Miz Fox was brief, but acceptably sassy and long overdue. The little minx made it quite clear she’s already over Tony Gillingham, which actually means she and Mary have yet another thing in common.

You see, the real reason for Mary’s trip, sadly, was to break things off with Tony. “I’ll always be fond of him,” she told Tom. “I want him to be the godfather of my children, just not the father.” (Side note: Is choosing your ex-boyfriend to be your child’s godparent not the worst idea you’ve ever heard?) Understandably, Tony was having none it, insisting that they can “work things out.” He also seemed surprised that a lady of Mary’s upbringing would sleep with a man she wasn’t absolutely sure she wanted to marry. (Is my slut-shaming detector going off? It’s been known to malfunction.)

ELDERLY FLAMES | The D.C. continued strolling down Memory Lane with her de-throned Russian ex this week, and things got real steamy. First he called her “magnificent,” then she remembered the time he asked her to run away with him, and then she… hired someone to help find his wife? I’m not really sure where that last step came from, either, but I’m hoping she’s long gone so we can keep this romance alive.

A DECENT PROPOSAL | Meanwhile, Isobel’s love life is hotter than Edith’s bedroom was during that fire she totally set on purpose. She’s still not sweet on ol’ Dickie Merton, so she was understandably taken aback when he “jolly well” jumped about eight relationship steps and asked her to marry him. Yeah… she’s going to need a minute to think this one over.

ONE-TWO PUNCH | “Dump on Edith” Week began with the secret mother being told to stop visiting Marigold all together, followed by an update (of sorts) about the long-lost Michael Gregson, who was probably killed by a renegade group of Germans (dot, dot, dot). On top of that, the dilemma triggered a little spat between Edith and the D.C., which never fails to give me heart palpitations.

BAD MEDICINE | And then there’s poor Thomas, for whom I feel genuinely sorry (just in case you thought that “poor” was a typo). That untrustworthy thief Baxter put three and three together when she (1) overheard him crying in his room, (2) spotted a crazy mess of needles and medication in his room and (3) skimmed an advertisement for “Choosing Your Own Path” in a magazine he’d been reading. Is Thomas pushing himself so deep into the closet that he’s hoping to pop out the other side? That’s not how this works.

So… Should Isobel give Dickie a “yes”? Are you hoping Mary changes her mind about Tony? And, seriously, is Miss Bunting not the worst? Drop a comment with your thoughts on this week’s episode below.