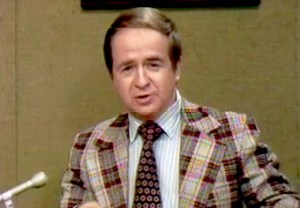 Veteran television and radio personality Joe Franklin, who often is credited with pioneering the modern TV talk-show format with The Joe Franklin Show, died on Saturdayfollowing a battle with prostate cancer, the New York Times reports. He was 88.

Affectionately nicknamed “The Wizard of Was” and “The King of Nostalgia” for his encyclopedic knowledge of old-time show business, Franklin’s guests on his New York-based TV talker over the decades ran the gamut from Charlie Chaplin, Marilyn Monroe, Vincent Price and Andy Warhol to Tiny Tim, Madonna, Woody Allen and Julia Roberts.

Franklin is credited with giving emerging talents (including Liza Minnelli and Dustin Hoffman) their first TV talk-show showcase, as well as booking elusive guests such as Frank Sinatra.

Franklin appeared as a guest on Conan O’Brien’s and David Letterman’s late-night shows, has received multiple nods on The Simpsons and appeared as himself in such films as Ghostbusters and Broadway Danny Rose. Billy Crystal spoofed Franklin in the mid-’80s on Saturday Night Live.

Having retired from TV, Franklin most recently could be heard on Bloomberg Radio and hosting WOR Radio’s Saturday-night oldies program.