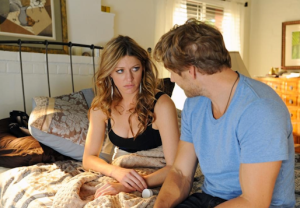 If the Season 2 finale of Mistresses — which ended with Alyssa Milano’s Savi about to bust her ex-husband and her younger sister mid-makeout — had you anxiously covering your eyes, you may want to maintain that position when the delectable sudser returns to ABC this summer.

Series star Jes Macallan tells TVLine that there’ll be no convenient time lapse to neutralize the fallout from the long-percolating hookup between her Joss and Brett Tucker’s Harry — or to deal with Milano’s unplanned exit ahead of the show moving production to Vancouver.

“We pick up right where we left off,” Macallan teases. “I was just talking to the producers, saying, ‘How are you going to do that?’ But they’re like, ‘It’s brilliant!'” And there won’t be any “weirdness” involving a CGI Savi, either, the actress adds.

From a dramatic standpoint, the decision makes sense, argues Macallan. “We really thought there was going to have to be a time jump, but they figured that out. Why skip away from [the drama of the Season 2 finale] and be like, ‘Here are our characters six months later'”? she asks. “It’d feel like a disservice. Everyone had big news coming in. Karen’s on the phone with the doctor, April’s got her daughter watching the TV [learning that] her dad was alive and now dead. Let’s go back to those moments. And that’s what were going to do. I’m excited.”

Macallan says she understood Milano’s “heartbreaking” decision not to continue with the show — “she’s a momma, she can’t move to Vancouver” — but once she’d processed the news, she says she began to wonder, “OK, who’s coming in new? What’s going to happen next?”

And what does Macallan think about Mistresses‘ fans very split response to Joss and Harry finally surrendering to their taboo attraction? “I love that! That’s what we wanted,” she says. “We just want to start a dialogue, always, and we accomplished that.

“To see the reactions, I was so happy that everyone wasn’t angry,” Macallan adds. “That’s all we wanted, was to not end the season with, ‘Aw, crap, you can’t do that!’ People were like, ‘I get it.’ They really do have a lot of love there, and it just happened.” (With reporting by Matt Webb Mitovich)

Excited that Mistresses won’t skip ahead to kick off Season 3? Any hopes for which actress might get added to the mix of core characters? Still coping with news of Milano’s exit? Sound off in the comments!