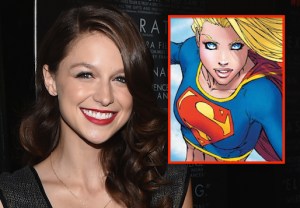 Look, up in the sky, it’s… Supergirl!

And filling the plum role on the upcoming CBS series, TVLine has learned, is Glee alum Melissa Benoist.

Per the CBS series’ logline, Kara Zor-El escaped her home planet of Krypton amid its destruction years ago. Since arriving on Earth, she has concealed the powers she shares with her famous cousin. But now, at age 24, she decides to embrace her superhuman abilities and be the hero she was always meant to be.

In addition to her run as Glee‘s Marley, Benoist’s credits include appearances on Homeland and The Good Wife, plus a supporting role in the Oscar-nominated Whiplash.

Other Supergirl roles to be cast include Kara’s science-minded foster sister, Alex; Cat Grant, the CEO of CatCo, a media conglom Kara toils for; CatCo colleagues James Olsen and Wynn Schott; and Hank Henshaw, the Supergirl-obsessed director of the the DEO (Department of Extra-Normal Operations).

Look, down in the comments, it’s… you having opinions!