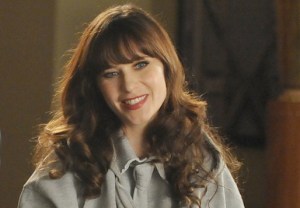 It’s a sweatshirt! It’s a suit! It’s The Swuit, the brainchild of Nick Miller and Schmidt, and it figures prominently in the Feb. 3 episode of New Girl (Fox, 9/8c). Wanna see?

The exclusive photos below give you a glimpse of the episode, which finds the roomies inventing a suit made of sweatshirt material and then pitching it to Shark Tank entrepreneur Lori Greiner.

Of course, Jess gets involved. “And then she gets in the way,” star Zooey Deschanel said, laughing, when TVLine recently visited the show’s set.

Click through the gallery below to see the enterprising pals in action.