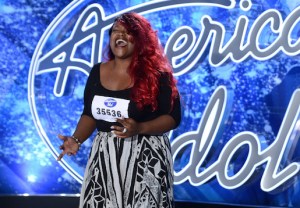 A glittering purple unicorn landed smack in the middle of American Idol‘s Season 14 New Orleans audition stop — which in no way suggests that the show’s producers surprised us with a special return appearance by Nicki Minaj at the judges’ table. (People genuinely like Keith Urban, after all — they don’t want to see him break out into a PTSD-induced panic attack.)

Rather, I’m talking about the Idoloonie Nation getting the all-too-rare opportunity to see a 2-to-1 vote against sending a contestant to Hollywood.

Don’t cry for 28-year-old Sarah Quintana, though. Sure, Keith was the only one to give her a “yes” vote, but as a consolation prize, she got Harry Connick Jr. to accompany her on the piano during her solid-though-not-really-spectacular take on “St. James Infirmary Blues.” You win some, you lose some. And sometimes you even spark strongly worded Twitter conversations about the show’s perceived bias against performers old enough to legally experience alcohol-induced dry heaves on Bourbon Street.

Personally, I’d have given Sarah her Golden Ticket — and told that 16-year-old spirit-squad squeaker from Texas to refocus her energy on becoming 2015’s answer to Tracy Flick. But I’m the kind of old-skool curmudgeon who questions whether there’s any high-school sophomore on the planet whose talents are so extraordinary that she ought to abandon her education to pursue ’em. (I mean, yeah, you say Jodie Foster, but I counter with Lindsay Lohan and Kylie Jenner.)

Oh God, I just brought the Kardashians into this recap. Somebody stop me. Actually, I’ll stop myself — and get to ranking tonight’s 13 Golden Ticket recipients (plus Sarah) in order from least- to most-promising.

13. Alexis Chappa, “Trouble” [Hollywood or Home poll] | I will sum up my feelings about this extremely dubious Golden Ticket with the following Tweet:

Um ,@AmericanIdol, this game is no fun if the answer is never #IdolHome. Yours truly, a monster of a human being.

12. Dakota Suarez, “Dog Days Are Over” | Teenage drag queen seemed to be running out of air by the end of his ambitious Florence + The Machine cover. As Harry noted, the kid’s got a nice voice, but he’ll have to travel a few more miles before he’s anywhere near spectacular.

11. Hope Windle, “Stupid Boy” | Montaged chick looked so shy while attempting a Keith Urban cover that nearly faded into the blue Idol backdrop. I second Harry’s “No” vote and nominate her as a candidate for the Melinda Veto (see video below if you know not of what I speak).

10. Grayson Turner, “Chasing Shadows” [original song] | There was a surprising amount of maturity in this 15-year-old’s performance — if not in his choice of flip-flops for his big audition! — but ultimately, I didn’t hear the kind of control and breath support required to survive out in front of Idol’s bandzilla.

9. Sarah Quintana, “St. James Infirmary Blues” | I couldn’t totally disagree with Harry and Jen that this young Susan Sarandon-looking gal fell a little short in terms of the conviction she brought to her vocals. What made her rejection painful, though, was the fact that just two auditions prior, we’d seen the vastly inferior (but a full decade younger) Tiffany sail through on the strength of… her cartwheeling skills?

8. Tori Martin, “What Are You Listening To?” | The good news is, this country chick hit most of her notes square on the nose — which won’t hurt at all in her quest to be country radio’s next big thing. The bad news, though, is that her, bejeweled headband upstaged her actual vocal performance. No, being stuck in a three-woman montage didn’t help, but still — a headband is an inanimate object!

7. Ricky Dale Hendricks, “The Thunder Rolls” | Utterly charming teen possesses the kind of smile that would make even Tim Urban jealous — and even though that grin didn’t quite fit the mood of his Garth Brooks cover, I couldn’t hold his audition-room excitement against him. As the judges noted, though, Ricky’s vocal technique is a little inconsistent — which raises the question: Would a rejection and a free pass to next season’s Hollywood Week have been a kinder choice than “throwing Ricky into the ring with Mike Tyson,” as Harry so ominously put it?

6. Erica Washington, “Halo” | Stunningly pretty single mom’s “thick sound” left Harry impressed, but I found myself slightly less enthused. Sure, Erika’s feathery upper register was flawless, but she intermittently pushed certain notes of Beyoncé’s ethereal ballad like she was trying to break down a door with a battering ram — causing her pitch to wobble ever so slightly.

5. Nalani Quintello, “Counting Stars” | I’m not sure why Nalani got the dreaded montage treatment, but her stripped-down, slowed-down OneRepublic cover — which was more of a haunting lullaby than a driving pop anthem — was really pleasing to the ear, no?

4. Quentin Alexander, “Royals” | I don’t know why the judges were all pretty much shouting “take more vocal risks!” — seeing how this fashionable fella really seemed to be pushing himself to the outer egdes of his vocal range on Lorde’s ubiquitous jam. No, he wasn’t perfect — but there was a sense of purpose to the guy’s performance, a depth he brought to the lyrics, that makes me want to hear more of what he’s got. And yes, sir, please keep the crazy Amish-Tribal thing going! We need more Idol males willing to break out of the “I bought this at The Gap” school of fashion. (I know, I know, I shop at The Gap, too, but I’m not giving a weekly televised mini-concert for 12 million people, am I?)

3. Mikey Duran, “My Demise” [original song] | LSU student’s lilting, almost tremulous tone was utterly distinctive — and revealed a vulnerability that I wasn’t expecting based on his easy banter with the judges. Kid can write, too — and his attempt to break into the bridge when the judges tried to cut him short was actually quite endearing.

2. Adam Lasher, “These Shoes” [original song] | J.Lo nailed it when she pointed out that Carlos Santana’s nephew looked a lot like Jimmy Fallon — especially when he smiles. Thankfully, though, Adam’s original tune — a weary but ultimately optimistic ditty about the struggles of a musician’s life — was anything but goofy. Dude’s weathered, raspy instrument — and his impressive guitar skills — should make him a genuine Hollywood Week contender.

1. Jelly Joseph, “Rolling in the Deep” | Oh how I wish our trusty exec producer, Per Blankens, had had the good sense to kick off the hour with the chic, effervescent Jelly — who took just the right amount of risks on Adele’s melody and showcased her own husky tone in the process. Instead, Jelly got stuck in the No. 2 performance slot — meaning the hour started with a sad joke of an audition focused on the cousin of Harry’s childhood babysitter slaughtering “P.Y.T.” Has Fox not gotten the memo that in 2015, the point-and-jeer component of Idol is as marketable as Clear Pepsi?

On that note, I turn it over to you. What did you think of the New Orleans tryouts? Who were your favorites? Were there any Golden Tickets you’d revoke? Take our poll below, then sound off in the comments!