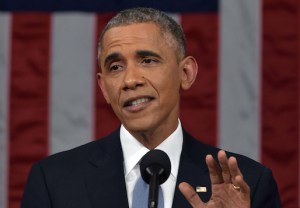 President Barack Obama’s Sate of the Union address on Tuesday night amassed 31.7 million total viewers across the broadcast and cable networks that covered it, down 5 percent from a year ago and thus marking a 15-year low.

NBC | This week’s Parks and Recreation double-pump averaged 3.9 mil/1.4, up 10 percent in audience but down a tenth in the demo from its final season premiere night.

FOX | MasterChef Junior (5.4 mil/1.7) added some eyeballs while steady in the demo, topping the night in the latter measure.