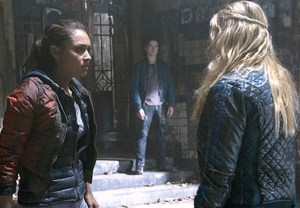 If you thought Clarke was having a rough time coping with Finn’s loss, just wait ’til you see how Raven is handling it — or, rather, how she’s not handling it.

“We see Raven go through it all,” Lindsey Morgan tells TVLine in advance of Wednesday’s The 100 winter premiere (The CW, 9/8c). “We see her throw herself into her work, she tries to block everyone out, she lashes out at people — and even that is just her putting her own pain on someone else. She’s got a giant hole in her heart, and you’re really going to see her struggle.”

As for Raven’s thoughts on Clarke…

“She’s not happy with Ms. Griffin,” Morgan admits. “Sure, [Finn] was the love of [Raven’s] life, but he was also her only family. He was all she had, and Clarke knew that. It almost makes it worse that Clarke and Raven had finally become friends; can you imagine your friend killing your family. If Clarke killed Bellamy, how would Octavia feel? They only have each other. It’s such an unforgivable act in Raven’s eyes.”

And even though Raven isn’t having Finn-visions (Fisions?) like Clarke, Morgan insists that Raven is carrying a “tremendous” amount of guilt. “If we were to do a special episode inside Raven’s brain,” she says, “We’d definitely see him.”

Other than that, Raven is just struggling with the usual: “She’s still paralyzed. Given their supplies right now, it’s amazing she’s even alive — and she does not get better.”

The 100 fans, how are you coping with Finn’s death, if at all? Does Raven need to ease up on Clarke? Browse photos from tonight’s episode below, then drop a comment: What do you hope happens next?