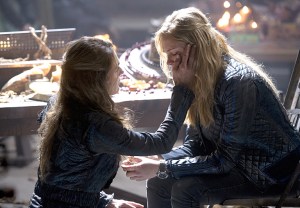 “Tonight, we celebrate our newfound peace; tomorrow, we plan our war,” Lexa announced on The 100‘s killer winter premiere. Unfortunately, the peace was short-lived — and the war hit very close to home.

Despite meeting all of the Grounders’ demands — including burning Finn’s corpse at the site of his massacre — the Sky People collectively remained public enemy No. 1 near the end of Wednesday’s episode after one of the Grounders was (allegedly!) poisoned by Raven. Fortunately, Clarke was able to expose the true culprit, Gustus, who intended to frame the Sky People and put a stop to their alliance with the Grounders.

And let’s talk about Clarke for a minute: Just as Lexa predicted (“What you did tonight will haunt you until the end of your days”), Finn’s ghost was never more than a few steps behind the show’s heroine, but new words from that same source (“The dead are gone … the living are hungry”) eventually turned the tides. Plunging that knife into Finn’s chest turned out to be the first step in Clarke’s journey to leadership; the second step was embracing the idea of equating love with weakness.

Do I like the idea of a cold, heartless Clarke? Of course not. But do I prefer it to a weak, victimized Clarke? You bet. 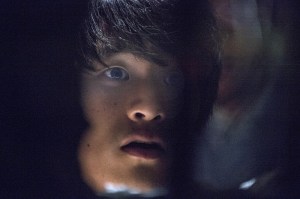 Over on Mount Weather, Monty managed to break into the control room and un-jam the signal which was preventing their S.O.S. from reaching their fellow survivors, but his victory — complete with a Hiro-style pose — was short-lived when a suspicious guard saw through his flimsy disguise. Now he’s trapped in the same cage as Harper; let’s just hope he doesn’t also share her fate.

Fellow Earth People, let’s hear your thoughts on Wednesday’s winter premiere: Did you get the Finn-closure you were hoping for? Are you happy about this new, badass Clarke? And which beloved Sky Person will be next on the chopping block? Drop a comment with your reviews and predictions below.