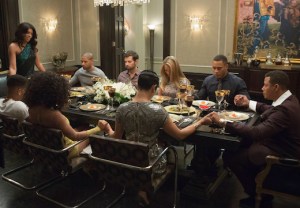 “Better be glad I don’t feel like no scene today — ’cause I’ll shut it down,” huffs Cookie Lyon, right after her ex-husband Lucious denies her access to a video shoot being run by his current flame Anika (code name: Bougie Ho) during this week’s Empire.

And for the first half of the episode, the quotable, cantankerous heart of Fox’s addictive hip-hop drama is on such good behavior, I worry that some misguided Fox executive might already be sending notes to the Empire writers’ room asking for a kinder, gentler, “more likable” protagonist.

Fret not, though. Just when you think our Cookie’s been replaced by a Nilla Wafer — who’s this gratitude-filled woman offering a humble prayer while holding hands with her family around the dinner table? — she finishes Grace with this doozy: “Do not withhold your blessings — even from hos that hire skanks to spy on me. In Jesus’ name, I pray. Amen.”

Amen indeed, Cookie! Way to slap down your rival without so much as lifting a hand (or a broom). If this were a title fight, Anika would be flat out on the canvas, cartoon birds and stars circling her head. If this were an episode of Top Chef, Padma Lakshmi would be all, “Anika, please pack your knives and go.” But this is Empire — where a delectable pre-dinner zinger is just an amuse-bouche in a larger feast of corporate espionage, federal investigations, major-label music rivalries, love triangles and good old-fashioned murder coverups.

So with that in mind, let’s recount the main action from “The Devil Quotes Scripture.” 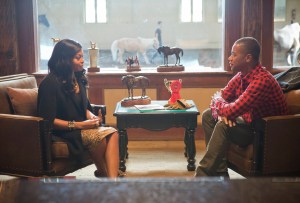 IT’S THE SAME OLD SONG | After getting shut down by Anika while trying to connect with a powerhouse Swedish songwriting duo, Cookie travels out to the farm — manure + stilettos, not a good combo! — to track down old flame Puma (Cuba Gooding Jr.). Even though he’s left the music game for charitable work with kids, she wants him to write a hook-laden song for Jamal — to ensure his creative genius translates to multi-platinum sales. Puma gives in to her charms, offers her an old tune called “Up All Night” that’s all about his unrequited crush on her — and whaddaya know? — Jamal updates it into a modern R&B heartbreaker. Only problem is… 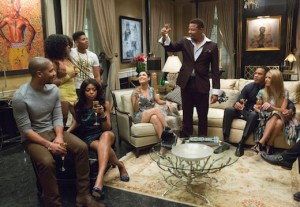 DADDY DOWNER | …Lucious’ unrelenting homophobia. Yep, at a family dinner where all the kids are invited — though it’s Cookie who gets Jamal’s beau Michael on the guest list — Jamal’s post-meal performance clearly leaves his papa impressed. But the father just can’t seem to leave a tender moment alone. He praises Jamal’s arrangement — then starts yammering about how it’d be perfect for John Legend’s upcoming record, seeing how Empire Entertainment owns the rights to it. Even Anika’s face registers a temporary “you’ve gotta be kidding me,” but Jamal’s already on his way out the door. “Tell me, how does it feel that your little girl could do something that you couldn’t,” Jamal says wickedly, throwing shade on Lucious’ inability to make “Up All Night” a hit (and his disgust over Jamal’s sexual orientation). “You’re washed up, and the songs that I’m writing will only further prove that I’m you —but on steroids.” Later that night, Lucious stops by Jamal’s place, but while his face reads apologetic, his words don’t quite follow suit — especially when Jamal reminds his father of the regular beatings he doled out throughout his childhood. “My obedience is no longer for sale,” the younger Lyon huffs, causing Lucious to point out the irony of delivering said speech in an apartment for which he’s not paying. This time, though, Jamal backs up his declaration of independence — he and Michael pack their belongings and leave behind the key — with nowhere in particular to call home. When Michael asks if Jamal is sure he wants to give everything up, though, it’s Jamal’s turn to channel his mother’s delicious flair for the dramatic: “I’m going after his empire,” he replies. “I’m gonna take it.” You do you, Jamal, and get yours in the process!

KILLER INTENT | Lucious sounds so sincere in his grief over Bunky’s death and his determination to catch his killer that it’s almost easy to forget he’s the one who pulled the trigger on his lifelong confidante. (Does getting Gladys Knight to perform at the funeral somehow absolve Lucious of some of his guilt? Discuss!) The only eye witness to the murder turns out to be a paranoid schizophrenic with a taste for cheap liquor, but he positively identifies Lucious as the murderer. That might not be admissible in court, but it means the heat will be turned up beneath the frying pan of Lucious’ current situation.

HOLY MOTHER OF MESSED-UP RELATIONSHIPS | Lucious and Anika decide that Hakeem’s relationship with budding R&B star Tianna is good for his brand — and set up the aforementioned dinner party to give her the family’s seal of approval. Little do they know, though, that the youngest (and brattiest) Lyon son has been in a relationship for over a year with a smokin’ hot older lady (Naomi Campbell) who makes him call her “my mama” in bed (or atop pool tables) (or wherever they wind up intertwined). Ewwww! I can’t wait for Cookie to hurl a cellphone at this predatory lady. #MetaPlotIdea

THIS IS THE WAY THAT COOKIE CRUMBLES | Damn that Anika! Turns out she hired a P.I. to follow Cookie — and dude snapped pics of her with that FBI agent who’s hounding her for intel. Nobody can I.D. the fed, but Lucious accuses Cookie of disloyalty — seeing how everybody’s sure the untraceable license plates = “law enforcement.” And so Cookie — who’s only told little sis Carol about her early-release deal — hatches a plan with her FBI contact: They conduct a meeting at Empire HQ and pass the woman off as Cookie’s parole officer. It works — but even more interesting, we learn the target of the investigation isn’t Lucious, but somebody named… Frank Gaddis? (I’m already casting in my head for this man of mystery — is Dennis Haysbert up to anything?) Cookie also catches a trembly Lucious trying to open a pill bottle — and her “we were married for years” intuition lets her know all is not well in the Empire empire.”Something’s got you shook, Lucious,” she says, half sympathetic, half menacing, “like it’s chasin’ you and you don’t want it to catch you.” Terrence Howard and Tarajoi P. Henson slay it in this scene, informing it with decades of history, a glimmer of romantic tension, and all the suspicion and treachery of two people who really don’t know if they can trust each other. Gooood stuff! 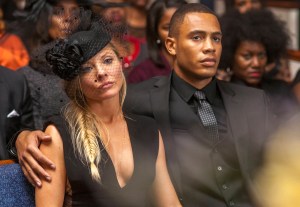 IN OTHER NEWS Porsha may not be the world’s best assistant, but her dismissive “Next!” while she and Cookie audition a potential songwriter makes her an excellent truth-teller in a hiring scenario. Andre’s wife Rhonda definitely did not get the memo about appropriate funeral attire! And the eldest Lyon son and his wifey not only have a verrrry open relationship — at least if he’s gathering intel — but she likes to roleplay his extramarital activities at home. The words “Deputy Mayor Alvarez” never sounded so dirty!

On that note, I turn things over to you. What did you think of this week’s Empire? Sound off below, and do share your theories about (and casting ideas for) the target of the FBI investigation!