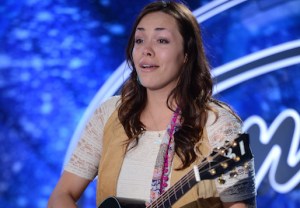 True confession: I may be the only person in the United States who dramatically slid down a wall and let out a tortured “NOOOOOOO!!!!” after learning that American Idol will eventually cut back to one night a week midway through Season 14.

After three consecutive hump days of middling vocals, “heard it all before” backstories and not nearly enough scenes of Ryan Seacrest getting bear-hugged by jubilant families, however, I’m reconsidering my stance.

Perhaps, in a world where orange is the new black and Idris Elba could/should be the next 007, less is destined to be the new more inside The House That Candice Glover Shook.

All that is my convoluted way of saying that Wednesday’s one-hour Minneapolis audition episode was almost as fast-forwardable as a Randy Jackson mentoring session (emphasis on almost). I’m going to go out on a limb and predict that two weeks from now, even the most rabid Idoloonie will be hard-pressed to name a single Golden Ticket recipient from Season 14’s northernmost audition pitstop.

But before I fall headlong into that rabbit hole, let’s rank tonight’s 12 Hollywood-bound singers in order from least- to most-promising:

12. Matt [no last name given], “Hold On, I’m Comin'” |
seriously thought this shaggy haired “#IdolHome” vs “#IdolHollywood” pre-commercial audition was a

11. Courtney Guns, “Independence Day” | I, too, was a little creeped out by the way she closed in on the judges during her performance — where are Maggie Q and Dylan McDermott when you need ’em? — but even more alarming was the way she landed a Golden Ticket despite a sense of pitch that was wobblier than a octogenarian on a balance beam.

10. Zach Johnson, “Don’t Close Your Eyes” | I was stoked Harry called him out for singing with a completely manufactured southern twang, but my mood immediately shifted to flummoxed after he got three “yes” votes for a second number that still had moments of faux-accent and several bum notes, to boot.

9. Cindy Jo Scholer, “Crazy” | Don’t judge this pre-K teacher for killing a bear with a bow and arrow, judge her for shouting Patsy Cline’s aching ballad with a gale force shout better suited to jolting a bunch of four-year-olds to come back to class after recess.

8. Shannon Berthiaume, “House of the Rising Son” | There was an appealingly raw ferocity to Shannon’s vocal — but the way she veered off pitch in her upper register, combined with her inability to show even the slightest hint of restraint — that left me thinking she needs at least another year or two of training before she’ll be ready for the big Idol stage.

7. Aaron Bissell, acoustic slow jam — title unknown | We only heard a few seconds of this acoustic-playing fella, but there was an odd, tight-throated quality to his tone that I can’t say I particularly loved.

6. Gabrielle Noe’l, “Love Song” | Twentysomething leasing manager got J.Lo to cop to her one-time job as a legal assistant — uh-oh, is that the sound of hundreds of appeals being filed? — and sounded pretty good trying to copy Candice Glover’s take on The Cure’s romantic ditty. There were a few places, though, where her voice seemed to give out a little — which made me wonder if Gabrielle has the tools to choose the right songs for her range.

5. Hannah Mrozak, “Something’s Got a Hold on Me” | Teenager with a big, belty voice nailed damn near every note of Etta James’ barn-burner — but her rendition lacked came up short on grit and maturity. I’m not a doctor, but I feel comfortable diagnosing Hannah with an acute case of Thia Megia Syndrome.

4. Jacob Tolliver, “Whole Lotta Shakin’ Goin’ On”/”Stay With Me” | OK, so his opening number was a straight-up Jerry Lee Lewis imitation — but his piano playing was remarkable, no? Like J.Lo, I kinda dug his Sam Smith followup – and felt it diverged enough from the original to stand on its own. Possible Hollywood Week dark horse — if he can keep the shameless mid-performance mugging to a minimum.

3. Vanessa Andrea, “Some Kind of Wonderful” | There was something seriously, surprisingly dark about this military wife and mother of three’s “Keith Urban is my Hall Pass” monologue — especially that detail about how she’d legitimately hoped to bump into him at her hotel. But — future Nashville or SVU story-arc inspiration aside — Vanessa showcased a solid sense of rhythm and some interesting nooks and crannies in her voice during her acoustic rendition of an old soul number.

2. Mark Andrew, “Soulshine”/”Be Like You” | I actually enjoyed the wooly-capped 29-year-old (and onetime Voice contestant) better on “Soulshine” than on his followup Jungle Book cover — despite the fact that the judges seemed to see it differently. Dude’s got a gruff authenticity about him, but I’m not sure if his understated performance style will really inspire a nation of speed-dialers should he survive Hollywood Week.

1. Morgan Ovens, “Hand in My Pocket” | She got the dreaded montage treatment, but Morgan’s crisp, clear Alanis cover was hands down the episode’s best vocal — from both the technical and emotional sides of the coin — even if I only had 15 or so seconds of footage on which to judge it.

On that note, I turn it over to you. Where you disappointed in the Minneapolis tryouts? Who were your favorites? Were there any Golden Tickets you’d revoke? Take our poll below, then sound off in the comments!