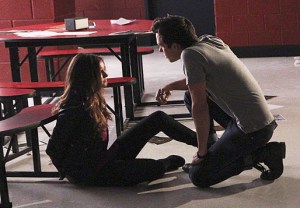 Try as she might to wiggle free, Elena is still very much in Kai’s clutches in this new batch of photos from The Vampire Diaries‘ Jan. 22 winter premiere (The CW, 8/7c).

TVLine recently spoke with TVD executive producer Julie Plec who explained what it’ll take for us to get (much) more of Kai moving forward:

“You have to take stock: Is there more that I can do with this character outside of his run as this year’s villain?” Plec explained. “If so, you have to come up with the right way to do it, and if not, you have to let the heroes get the win over the villain. Every day, we talk about Kai, and we debate it. It’s an ongoing conversation.”

The new batch of photos also includes a few shots of Stefan’s upcoming confrontation with Enzo — their game of Tug o’ Sarah Salvatore is about to get ugly — as well as a puzzling photo of Alaric and Jo at the Salvatore mansion, where he and Liv are preparing her for the merger.

What do these new photos mean to you, TVD faithful? Browse the gallery below, then drop a comment with your thoughts and theories.