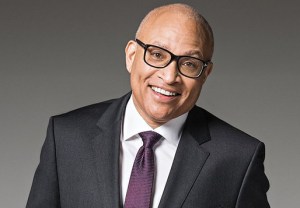 Let’s be clear: The only thing  The Nightly Show With Larry Wilmore has in common with The Colbert Report is its timeslot.

There’s no over-the-top character here, no mock interview — at least not in Monday’s debut episode — and absolutely no beating around the bush. “A brother finally gets a show on latenight TV, but of course, he has to work on Martin Luther King Day,” host Larry Wilmore quipped before introducing the night’s theme: the apparent ineffectiveness of racial protesting.

After dissecting the issue in his opening monologue, during which he tested an “I can’t breathe” joke (“Too soon?”) and explained that Al Sharpton is not “Black Batman,” Wilmore was joined by four panelists — musician/activist Talib Kweli, comedian Bill Burr, Indian model/actress Shenaz Treasurywala and New Jersey Senator Cory Booker — to further break things down.

Wilmore’s “Keep it 100” segment lightened the mood a bit, requiring each panelist to blindly answer an on-topic question as honestly as possible — and Wilmore did not go easy on them. Burr was asked, if given the choice, whether he’d have a black or white child, while Booker was asked whether he’s interested in becoming President of the United States of America.

For the record, their answers were “white” and “no,” respectively.

It should also be noted that Wilmore ended his debut half-hour with “a tip of the hat and a wag of the finger” to Stephen Colbert, adding, “Thanks for making 11:30 special, my friend.”

Your thoughts on The Nightly Show With Larry Wilmore? Grade the premiere below, then drop a comment with your full review.