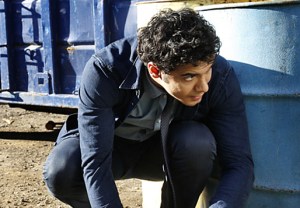 If there’s somethin’ strange in your neighborhood, who ya gonna call?

The minds behind CBS’ freshman drama are making that possible, with a fun Easter egg in tonight’s episode (9/8c).

As the Scorpion team attempts to jog the memory of an injured former Secret Service agent, they uncover a phone number that viewers will actually be able to call — and whomever is on the other end may have some interesting intel to share.

“We really can’t stand when television shows and movies use 555 numbers,” executive producers Nick Santora and Nick Wootton said in a statement. “It just takes you out of the moment. So when our geniuses discover a phone number that reveals a lead in their case, we wanted to use the real thing. And it works! Plus, we added a little something for the fans.”

Is Scorpion‘s real phone number a genius idea? Will you give it a call?