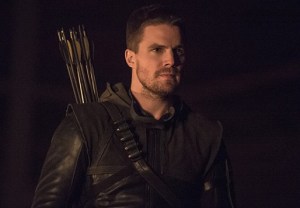 Oliver Queen may be dead… but he’s not gone.

On the winter premiere of The CW’s Arrow (airing Wednesday at 8/7c), the vigilante will still have a presence despite having suffered a fatal stabbing at the hand of Ra’s al Ghul, showrunner Marc Guggenheim tells TVLine.

Oliver’s loved ones, however, will be feeling his absence, while Thea inches closer and closer to learning the truth about her brother. Meanwhile, Felicity finds herself in a déjà vu scenario with Ray and forming a bond (of sorts) with Laurel.

Here are answers to some burning Qs about what’s to come, as we mourn Oliver Queen….

HOW WILL ARROW LIVE ON WITH OLIVER DEAD? | “You will certainly see him in flashbacks,” Guggenheim says. “In fact, Episode 10 has, I think, some of the most intense flashback action we’ve ever had. We’ve got Oliver literally ziplining between buildings, as the camera follows him through a window, and there’s a huge shootout…. You’re still going to get plenty of Oliver. The how and the when and the why, that’s all a surprise.”

HOW DOES TEAM ARROW 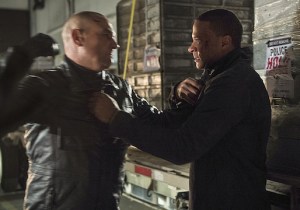 REACT TO THE NEWS? | Professionally, Diggle will again don the Arrow costume as he and Roy/Arsenal fill the crime-fighting void. But personally, for Team Arrow, “There’s a lot of emotional examination that we have to do,” David Ramsey says of the aftermath. With his military acumen and her techno-smarts, original team members Diggle and Felicity “become essentially the leaders on Team Arrow,” Ramsey adds. “And you also see me have very wonderful, poignant scenes with Katie [Cassidy], which is great. We both love Oliver, so you see these people, because of their different attachments to Oliver, react in various ways.” 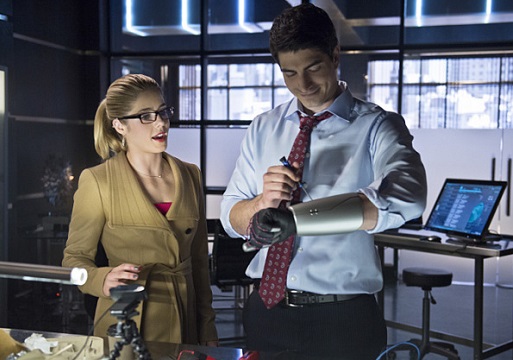 Ray “was already on that trajectory,” Guggenheim notes. And even though what happened to Oliver isn’t public knowledge, there is a connection. “The relationship between Oliver’s death and Ray’s journey really lies in Felicity,” says the EP. “Felicity is of the opinion that Oliver went off to have a duel to the death with the most dangerous man in the world… basically, a suicide mission. And here she finds, contemporaneous with Oliver’s death, Ray embarking on his own suicide mission. In [Episode] 9, she said, ‘Why does this keep happening to me?’ and Ray represents an opportunity for her to try to fix what she considers a mistake that Oliver made, to prevent him from also tempting fate. Whether or not she’s successful, that’s part of these upcoming episodes.”

WHO CAPITALIZES ON THE ARROW’S ABSENCE? | For starters, Vinnie Jones (Elementary, Galavant) debuts this week as Danny “Brick” Brickwell, a rather impervious fella who “comes to take over the Glades” with a little help from some frenemies, says the guest star. “He gathers up some villains to help him — and it’s not a little team. It’s a pretty impressive lot!”

ARE LAUREL AND FELICITY ON THE CUSP OF FRIENDSHIP? | If only because the former is poised to join the costumed brigade, as the new Canary? “I would say they’re definitely friendly,” Guggenheim answers. “Are they on their way toward becoming friends? We’ll see what’s organic and feels right. Part of the fun of watching these two characters interact right now is they don’t have this background of friendship to fall back on. All they really have is this common denominator in Oliver, and in Oliver’s crusade. So watching that relationship slowly unfold and build naturally — with all of its awkwardness, where Felicity’s like, ‘Am I out of line by saying this? Am I out of line by saying that?’ — is really fun and interesting, especially to watch Emily [Bett Rickards] play it because she always brings such  an authenticity to those sorts of moments.”

WILL THEA BE TOLD ABOUT OLIVER? | “One of the things that is sort of the stock-and-trade of the show,” Guggenheim reminds, “is people keeping secrets from other people — when are those secrets going to get revealed? How do we turn those cards over? And once we do turn those cards over, what are the reactions? 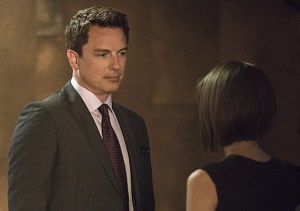 It’s not spoiling anything, knowing us, to say that eventually Thea’s going to find out what happened with Oliver. Her reaction, though, hopefully will surprise you. And the how and when and why we do it will also surprise you.”

WHAT DOES OLIVER’S DEATH MEAN FOR MALCOLM? | Like, is the League of Assassins still after its castoff and those he loves? “That question gets answered very specifically [this week], because Malcolm is going to be the one to tell the team that Oliver’s dead,” Guggenheim shares. “All the repercussions that you’re talking about are still very much in play, and Malcolm’s the one who knows it the most and is worried about it the most.”

HAVE WE SEEN THE LAST OF RA’S AL GHUL? | Or was he brought on to do more than fell Oliver? Exec producer Greg Berlanti promises that the League of Assassins overlord is “very vital in the back half of the season,” adding: “You’re probably starting to see our tricks by now, where the midseason cliffhanger is very much declarative of the back half of the year. “

Coming later this week: In an in-depth Q&A, Stephen Amell ponders Oliver’s fate, discusses whether Arrow has room for a great romance and teases the show’s “most enjoyable” episode to date.