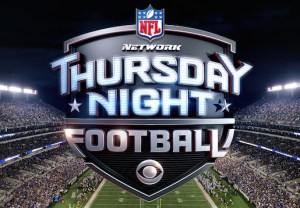 CBS has renewed its deal to share dibs on Thursday Night Football with the NFL Network.

Akin to the original arrangement for this past fall, CBS will simulcast the first eight of the 14 TNF games.

To accommodate the sports package in its inaugural year as broadcast partner, CBS opened The Big Bang Theory‘s season on Monday nights while postponing the premiere of Elementary and other Thursday shows until late October.