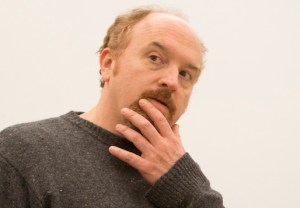 Louis C.K. will be taking the stage at FX again this spring.

The cabler’s comedy Louie will return Thursday, April 9 at 10:30 pm, it was announced Sunday at the Television Critics Association press tour.

John Landgraf, CEO of FX Networks, confirmed that Louie Season 5 will only span eight episodes, instead of the 13 and 14 of past seasons.

Per FX, the 13-episode Comedians stars Billy Crystal as “a comedy legend who is reluctantly paired with Josh Gad (1600 Penn), an edgier up-and-coming star, in an unfiltered, behind-the-scenes look at a fictional late-night sketch comedy show where egos and generations collide.”

Mel Brooks will guest-star as himself in an episode when Crystal’s character goes to him for advice, executive producer Ben Wexler revealed at the show’s panel.

Additionally, the network has ordered Better Things, a comedy pilot created by Pamela Adlon (Louie) and directed by Louis C.K.

Adlon will star as Sam, a single mom who is trying to raise three girls while pursuing an acting career.

Looking forward to Louie Season 5? Intrigued by The Comedians and Better Things? Hit the comments with your thoughts!