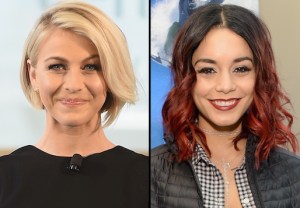 Fox’s live staging of Grease has found its Sandy and Rizzo — as well as a premiere date.

Dancing With the Stars alum/actress Julianne Hough will fill the role of Rydell High noob Sandy, while High School Musical grad Vanessa Hudgens will get a hickey (if not more) from Kenickie, as bad girl Rizzo.

The three-hour live musical staging, which was originally announced to bow this year, instead will be broadcast Sunday, Jan. 31, 2016, starting at 7/6c.

That leaves, among others, Danny Zuko still to be cast. Who’s your pick to fill Travolta’s shoes as the greaser?