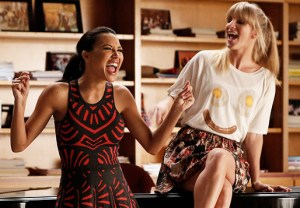 Friday’s Glee was all about mashing things up: songs, relationships and — in the case of Becky and her new beau — bare gennies. But it was also about honesty, which didn’t exactly come naturally for most of the gleeks.

In fact, Santana remained one of the few brutally honest people at McKinley, and she dropped a steaming truth bomb on Kurt “Negative Nancy” Hummel after he objected her engagement to Brittany. (Oh, that’s right, Brittana is engaged!) Kurt argued that Santana and Brittany, like he and Blaine, are too young to get married, but as Santana pointed out, age wasn’t the main factor in Klaine’s downfall.

Per Ms. Lopez, here are the nine (incredible) reasons that Blaine doesn’t want to get back together with Kurt:

1. Kurt’s mouth looks like “a cat’s ass.”
2. Kurt equates cooking macaroni and cheese with being “at the apex of the gay rights movement.”
3. Kurt looks like he “just removed the top row of [his] dentures” when he smiles.
4. Kurt looks like an extra from “one of Andy Dick’s more elaborate wet dreams.”
5. Kurt is a “breathier, more feminine” Quinn Fabray.
6. Kurt is obsessed with old people.
7. Kurt drapes himself on every piano he passes, “entertaining no one.”
8. Kurt is a “sexless, self-centered baton twirler” with three dance moves.
9. Kurt is “utterly, utterly intolerable.”

That said, it was still heartbreaking to watch Kurt remember all the good times he shared with Blaine as the new New Directions crooned mashups of Carole King and Alanis Morrisette. (And I have to agree with Brittany: the thought of Blaine and Karofsky boning does conjure mental images of a U-Haul mounting a moped.) 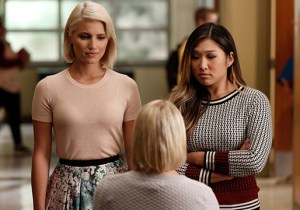 BECKY’S B.S. | Much of this episode revolved around the romantic drama of Sue’s mini-me, who also came back to McKinley this week, causing even more confusion about where these kids all go to school and how much time they can take off. Aaaaanyway, Becky brought her new boyfriend to visit and had to admit that, despite everything she told him, she was not the president of every club in school — and she definitely wasn’t in the glee club. It was a refreshing take on honesty, and the conversation about whether or not Becky should be sleeping with her boyfriend — who does not have Down syndrome — was enlightening.

THE BEISTE WITHIN | When Coach Beiste began exhibiting strange behavior — taking lots of personal days, popping pills, lashing out at her team, etc. — Sue decided to confront the gentle giant, only to learn… she has cancer! Except she doesn’t. She was lying to cover up the fact that she’s beginning her transition into a man, and Sue says his job will be waiting for him when he’s done with all of his procedures.

OK, your turn to talk about this week’s episode: How amazing was Santana’s Kurt-takedown? What were your favorite performances? And how surprised (or not) were you by Beiste’s revelation? Drop a comment with your review of the episode below.