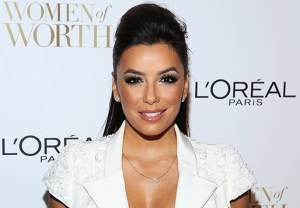 Longoria’s post-Housewives credits include roles in Brooklyn Nine-Nine, The Simpsons and Welcome to the Family.

* The Vampire Diaries has finally found the real Sarah Salvatore. Tristin Mays (Big Time Rush) will recur as Stefan and Damon’s distant relative, per The Hollywood Reporter, beginning in the Jan. 22 winter premiere.

* Albert Tsai (Trophy Wife) will appear in two yet-to-be-scheduled episodes of ABC’s Fresh Off the Boat, TVLine has confirmed. Tsai will play a fellow Chinese student who bonds with Eddie — until Eddie comes to realize that being Chinese is the only thing the two have in common.

* A&E has released a creepy new trailer for its upcoming drama series The Returned, Carlton Cuse’s adaptation of the French series of the same name. The Returned premieres March 9.