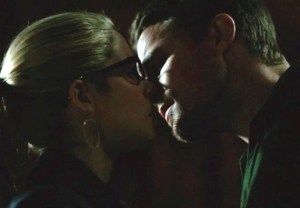 Valentine’s Day came early for some Arrow fans, when on Friday evening a video of Oliver and Felicity’s “lost” first kiss wowed the World Wide Web.

The deleted moment came at the close of Season 2, when Oliver — knowing that Slade Wilson was listening in/hoping to identify his adversary’s weak spot — told Felicity that she, not Laurel, was the woman he loved. (He who is also known as Arrow was ostensibly “misleading” Slade, but in truth we know… well, what we know.)

The Arrow faithful never had a chance to lay eyes on the lopped liplock until now, when showrunner Marc Guggenheim — who as of late has been very interactive via his Tumblr account — made good on a promise to release the scene, if fans got “trollenheim show us olicity kiss 2×23” trending. And apparently they did.

Check out the clip below (ported to YouTube by an industrious Emily Bett Rickards fan group), and weigh in on which “Olicity” kiss is best — the “lost” one, or the pair’s break-up buss from the Season 3 premiere.