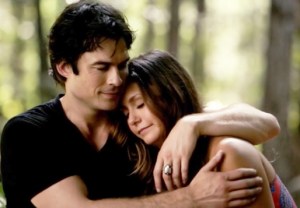 Happiness is always a rarity on The Vampire Diaries, but it sounds like the drama’s Jan. 22 return (The CW, 8/7c) will find our favorite couples more divided than ever — at least initially.

With seven days until TVD‘s glorious return, TVLine caught up with executive producer Julie Plec for seven teases about what’s to come. Think of this interview as your personal vampire-themed Advent calendar — or you can just read all the answers in one sitting. This is America.

TVLINE | Kai seems to be the only obstacle standing between Damon and Elena at the moment. Will any additional problems arise?
There are a lot of emotional obstacles, the little details. Can Elena get right with her feelings for him? Is she falling in love with him all over again? As they fight the bad guys, deal with loss and grief, character exits, that kind of thing … do they stay strong, or do they drift apart? I’d really like to see them make it and be happy for a little while.

TVLINE | We’re loving Kai. How long will he stick around?
That’s the problem when you have an actor who’s so great and who the audience responds to as a villain. You have to take stock: Is there more that I can do with this character outside of his run as this year’s villain? If so, you have to come up with the right way to do it, and if not, you have to let the heroes get the win over the villain. Every day, we talk about Kai, and we debate it. It’s an ongoing conversation.

TVLINE | Who has a better chance of surviving: Sheriff Forbes or Steroline?
[Laughs] I think that both of them have some pretty extreme hurdles to cross. Both story lines are going to be incredibly emotional, no matter how much you look at it. 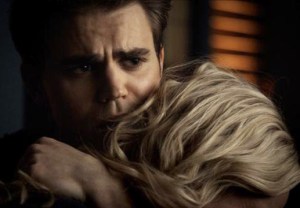 TVLINE | We know Stefan will be helping Caroline save her mom. Will that bring them closer together?
At first, it’s going to shore up their friendship and bring up more of those romantic questions. But I can’t guarantee there won’t be a stumbling block or two that prevents them from seeing things clearly.

TVLINE | Do you have a time frame for Bonnie’s return from 1994? What will her biggest adjustments be?
We can expect it by the end of the run of this next chapter, which is approximately Episodes 11 to 15. It changes her forever. She’s been to hell and back, so to speak, and she’s had to do a lot of it on her own. Anyone who goes through an experience that isolating and that lonely isn’t going to come back ready to dive back into their old life. We’ll see her try to find her way and heal herself. We’ll see if her friendship with Damon is true, and if he’s someone who can help her heal.

TVLINE | How is Sarah Salvatore going to factor into the story as we know it now?
Sarah Salvatore factors into the story right away when we come back from the hiatus. Stefan hears that Caroline’s going to Duke to talk to a researcher who specializes in her mom’s condition. So he hitches a ride and goes to check in on Sarah, make sure she’s still doing OK. Only this time, he’s had someone follow him who’s also checking on Sarah, which is Enzo. Stefan knows that all the work he’s done to keep this girl away from the supernatural is jeopardized by the fact that Enzo knows who she is.

TVLINE | You also recently teased a big death on Twitter. When can we expect that?
There’s going to be at least one major death coming — and soon. I think the death count by the end of this season is going to be astonishingly high.

TVLINE | Do you have an end in sight? How much further beyond Season 7 could the show go?
When you’re dealing with a show like The Vampire Diaries, which kind of gave the network a boost it really needed, and has continued to have such a loyal and passionate fan base, I don’t think we necessarily get to make the decision about when it’s over. The decision will be made by a lot of things: How much story is left to tell? How many actors are left to tell that story? How many shows like The Flash will come along, with great success, so that the network doesn’t necessarily need us in the way they used to? That could take a couple years, or it could go on as long as possible.

What are your hopes for Mystic Falls’ finest as we move into the second half of Season 6? Drop a comment with your thoughts and theories below.