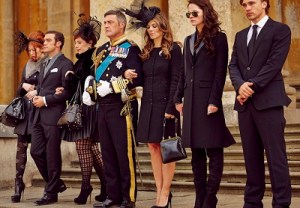 E! is keeping The Royals on their thrones.

The network has renewed its first original scripted series — which only makes its debut on March 15 — for Season 2, the network announced at the Television Critics Association press tour in Pasadena on Thursday.

The drama — from creator Mark Schwahn (One Tree Hill) — stars Elizabeth Hurley (Gossip Girl) as the royal family’s matriarch, who comes into conflict with her head of security’s daughter (Ravenswood‘s Merritt Patterson) when the young woman begins a secret romance with Prince Liam (The Chronicles of Narnia films’ William Moseley). (Watch a trailer here.)

E! also ordered a second season of reality series House of DVF, which features designer Diane von Furstenberg and a group of candidates competing to be her company’s brand ambassador.