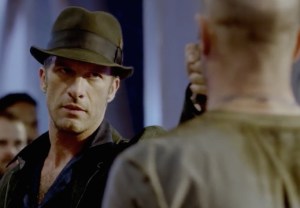 On Thursday at the Television Critics Association winter press tour, Syfy premiered a sizzle reel for The Expanse, which network president Dave Howe touted as the cabler’s “most ambitious series to date.”

Set 200 years in the future, after mankind has colonized the solar system, the 10-episode thriller follows a hardened detective (Thomas Jane, Hung) and a rogue ship’s captain (Steven Strait, Magic City) as their investigation into a missing young woman evolves into a race across the solar system to expose the greatest conspiracy in human history.

The Expanse will premiere sometime during 2015.
http://youtu.be/8X5gXIQmY-E